New figures by the Ministry of Public Health showed that conflict-related violence in the past 12 months has left more than 3,300 civilians dead and over 14,600 others wounded. 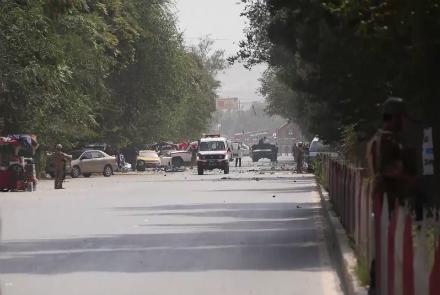 The time period measured is from September 16, 2018, to September 10, 2019.
“Our system is active in all 34 provinces and we collect data…and when the numbers are verified we enter them into the system,” said Mir Lais Mustafa, head of the Incident Response Department of the Command and Control Center.
The report does not make claims about which military or group is to blame, although it measures those killed in suicide attacks, which is 460 killed, and 1,200 wounded.
And while insurgent groups are responsible for a high number of civilian casualties, those monitoring the human cost of the war say that all sides in the fighting are responsible.
The Independent Human Rights Commission has raised concerns over civilian casualties due to Afghan and foreign forces’ operations and airstrikes in the country.
“Unfortunately, we have witnessed civilian casualties from the security forces operations in the Sayed Abad district of central Wardak province and Khogyani district of Nangarhar province,” said Abdul Shakur Mashkur, a commissioner at the Independent Human Rights Commission.
The Ministry of Defense and the Ministry of Interior state that they have made efforts to prevent civilian casualties during military operations.
“Security forces are trying hard to take care of civilians’ lives and not harm them,” said Rohullah Ahmadzai, a spokesman for the Ministry of Defense.
“Whenever civilians are harmed by a mistake of the security forces, we investigate the incident and those who have been negligent face serious punishment,” says Nusrat Rahimi, a spokesman for the Ministry of Interior.
But Selab Ghorzand, a civil society activist, asks: “Why do they operate this way and kill civilians? We think that they [security forces] have kangaroo courts like the Taliban and the Daesh, which is wrong."
In its latest report, the United Nations also expressed concern over civilian casualties in the Afghan war and called on the parties involved in the war to take measures to reduce civilian’s casualties.
According to this latest measurement by the Command and Control Center, Baghlan, Kunduz, Nangarhar, Helmand, and Kunar are the provinces with highest civilians’ casualties and Bamyan, Daikondi, Paktia and Balkh have the lowest civilian casualties.
Tags:
3,300 Civilians Killed By Afghan Conflict In 12 Months: Ministry
Source : Afghan Voice Agency(AVA)
Monday 23 September 2019 19:16
Story Code: 192035 Copy text available
Ministry of Finance and the World Bank Sign 3 Grant Agreements of $691Million Improve Afghanistan's Economy and Healthcare
TAPI 'A Milestone' In The Country's Development
Afghan Ports’ Responsibility To Be Handed To Finance Ministry
Lavrov to meet Trump in Washington, Russia’s Foreign Ministry confirms
Russian, US diplomats discuss Afghan settlement
Featured news
Nabil: Government’s Ploy To Release Taliban Prisoners But Make People Take Responsibility
US cargo plane lands in Israel in support of the regime's Iron Dome
Novavax Signs COVID-19 Vaccine Supply Deal with India
Four arrested in Kabul for allegedly duping dozens over visas
Afghan police officer arrested in connection with the killing of his 3 comrades
Pakistani soldiers suffer casualties in firing from across Durand Line with Afghanistan
1
MoPH Survey Finds 10 Million People Infected With COVID-19 In Afghanistan
2
USAID steps in to help WFP feed 95,000 desperate Afghan families
3
COVID-19 Latest: One of 19 Test Positive in Afghanistan
4
UAE starts first nuclear reactor at controversial Barakah plant
5
Hundreds of prisoners rounded up as Jalalabad prison attack continues
6
50-70 percent of police positions in four Afghan provinces are ghost soldiers: SIGAR
7
COVID-19 Latest: 36 of 187 Cases Test Positive in Afghanistan
8
No end in sight to COVID crisis, its impact will last for ‘decades’
9
75 More Afghan Sikhs And Hindus Returning To India
10
Taliban Kill 4 Protestors Demonstrating In Khwaja Ghar District Of Takhar