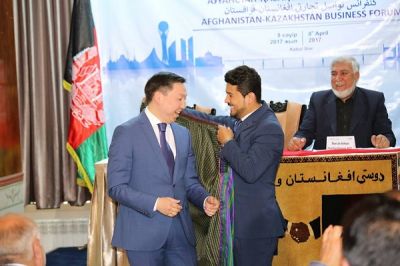 The statement was made during a business forum including representatives of Afghanistan and Kazakhstan in Kabul.

According to officials, Afghanistan’s imports from the Central Asian nation amounted to $426 million while the volume of exports stood at $11 million.

This comes as Afghanistan is seeking to reduce its trade reliance on its uneasy neighbour Pakistan.

Jankhan Alkozay, the deputy head ACCI, said that Kazakhstan could act as a transit point for trade between Afghanistan, Russia and China.

He said that Afghanistan produced 1 million ton of fruits and vegetables last year, of which, it exported 140000 tonnes, mainly to Pakistan.

Currently, 44 companies have invested in Afghanistan at the value of $30۰ million.