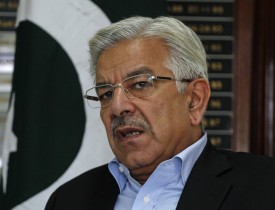 AVA- Asif who has returned from a series of trips to the mentioned countries, told a private TV channel that Islamabad’s stance on Afghanistan is the settlement of the current issues through political means.

Opposing the deployment of further troops to Afghanistan, Asif said Iran, Turkey, and China have agreed that there is no military solution to the problems in Afghanistan as it should be resolved politically.

He said the three nations have acknowledged Pakistan’s sacrifices in the war against terrorism.

Asif also expressed concerns regarding the presence of India in Afghanistan and claimed that the country only invests in the Afghan territories located close to the border line.

According to Asif, the issues has been shared with the Prime Minister and it is expected that the issue will be discussed with the world leaders including President Mohammad Ashraf Ghani in the near future.

This comes as the Afghan officials have long dismissed the concerns by Pakistan regarding the presence of India in Afghanistan which has played a key role in the reconstruction of the country after the fall of the Taliban regime.

Afghan Ambassador to Pakistan Dr. Omar Zakhilwal earlier said Islamabad should not object regarding the Kabul and New Delhi relations assuring that Pakistan will never be harmed from such relations.

He also insisted that the two countries should respect the sovereignty of each other and work towards betterment of ties and increase efforts in sustaining a good relations.