Afghanistan-India trade via Chabahar not against Pakistan: Pak FO

The Foreign Office of Pakistan has said the trade between Afghanistan and India through Chabahar port in Iran is not against Pakistan. 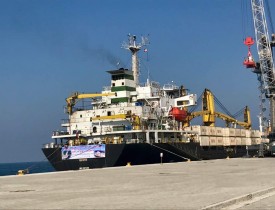 AVA- A spokesman for the Foreign Office of Pakistan Mohammad Faisal has told Tehran Times that “We do not regard it as any kind of alliance against us. Our trade with Afghanistan, Iran and China continues as before.”

Faisal has further added that Afghanistan has a right of transit access through any neighboring country according to its needs.

He also ruled out that Iran, India and Afghanistan’s endeavor to use port for bilateral trade is an alliance against the country and the China-Pakistan Economic Corridor (CPEC).

The Ministry of External Affairs of India in a statement said “External Affairs Minister Smt. Sushma Swaraj and Foreign Minister of the Islamic Republic of Afghanistan H.E. Salahuddin Rabbani, through a joint video conference, flagged off the first shipment of wheat from India to Afghanistan that would be transhipped through the Chabahar port in Iran.”

The statement further added that the shipment is part of commitment made by the Government of India to supply 1.1 million tons of wheat for the people of Afghanistan on grant basis.

“The two Foreign Ministers welcomed the fact that this is the first shipment that would be going to Afghanistan through the Chabahar port after Trilateral Agreement on Establishment of International Transport and Transit Corridor was signed during the visit of the Prime Minister of India to Iran in May 2016,” the statement added.

According to the Indian officials, six more wheat shipments will be sent to Afghanistan over the next few months. They also reaffirmed their commitment to continue their cooperation for the benefit and prosperity of the people of Afghanistan and the region.