Afghan officials said with the opening of Chabahar Port, Afghanistan will no longer be dependent on Karachi Port. 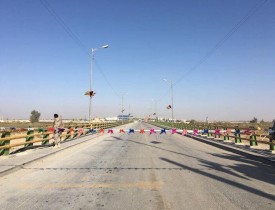 AVA- The first shipment from India, of wheat, via Iran's Chabahar Port arrived in Nimroz, in the country’s west, on Saturday.

Senior government officials and the Indian ambassador to Kabul, Manpreet Vohra, attended a ceremony to inaugurate the new trade route – which according to officials, will help Afghanistan overcome its dependence on other trade routes, including Pakistan.

"With the opening of Chabahar Port, Afghanistan will no longer be dependent on Karachi Port,” Nimroz governor Mohammad Samiullah said.

“This port will create thousands of jobs and bring billions of dollars in revenue to Afghanistan, Iran and India.”

He said the residents of Nimroz are determined to ensure the Nimroz--Delaram roads is secure. This route leads directly to Chabahar Port in Iran.

At the same event, Nasir Ahmad Durani, acting minister of agriculture, said the cooperation between Afghanistan, India and Iran in the Chabahar region is a great opportunity to boost trade ties between the three countries.

He said the shipment is part of the 1.1 million wheat pledged by India’s Prime Minister Narendra Modi to Afghanistan – during his visit to Kabul.

According to him, 700,000 tons of the wheat has so far arrived in Afghanistan.

He said the reason for cooperation between India and Iran to help Afghanistan is to find an alternate route for trade between the three countries.

The Indian envoy said Chabahar Port’s route will not be closed at random - which is a problem Afghanistan faces in working through some countries in the region.

Vohra says Saturday's shipment is part of the wheat promised by India to Afghanistan.

Dozens of Nimroz residents attended the inauguration of the Chabahar Port route and performed traditional dances.