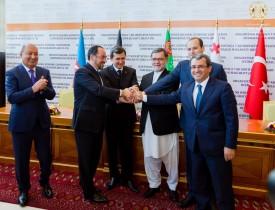 AVA- The route is considered to be the shortest route for Afghanistan to Black Sea, the Mediterranean and the European market.

The agreement on route was signed during the seventh Regional Economic Cooperation Conference on Afghanistan.

Afghan Foreign Minister Salahuddin Rabbani who was addressing the conference called the signing of the deal as a “milestone in our collective efforts to achieve greater connectivity.”

The agreement on the route, a lynchpin in reviving the ancient Silk Road, focuses on the custom facilities, easing visa processing and facilitating the transactions of goods.