The Chief Executive of the Government of National Unity of Afghanistan Abdullah Abdullah has warned the recent US decision regarding Jerusalem will affect the regional and global peace efforts. 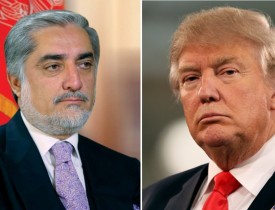 AVA- In a video in response to President Donald Trump’s announcement, Abdullah said the Afghan government is concerned regarding the decision, emphasizing that international decisions are available in this regard at the level of the UN Security Council as well as the UN General Assembly.

Abdullah further added that the Afghan government and nation has a united stance in this regard and will continue to its efforts in international framework in support of the legitimate demands of the people of Palestine for a sovereign nation with the eastern Jerusalem being its capital.

The US President Donald Trump on Wednesday formally recognized Jerusalem as the capital city of Israel instructing the Department of State to shift the US embassy from Tel Aviv.

“Today we finally acknowledge the obvious: that Jerusalem is Israel’s capital,” he said.

Trump further added that Washington still supports a two-state solution to the longstanding Israeli-Palestinian conflict, if approved by both sides.

The ARG Presidential Palace in a statement had earlier said that the decision regarding Jerusalem should be taken in consideration with the sensitivity of the Muslims and other religions to which the place is considered as sacred and in line with the international laws.