An Iranian minister has claimed that the Islamic State terror group is attempting to occupy lands in Afghanistan and Pakistan as the group has been suppressed in Syria and Iraq. 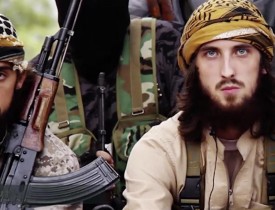 AVA- Iran’s Intelligence Minister Seyed Mahmoud Alavi has said “The ISIL has lost land but it has not surrendered its arms and is after occupying lands in Afghanistan, Pakistan and anywhere else possible to revive the idea of the Islamic caliphate,” according to Iran’s Fars News.

This comes as reports emerged earlier suggesting that foreign militants affiliated with the Islamic State terror group including French and Algerian nationals have moved to Afghanistan after they were suppress during the operations in Syria and Iraq.

Sources privy of the development have told AFP that several French and Algerian IS fighters were seen in northern Jawzjan province of Afghanistan.

Darzab district administrative chief Mohammad Dawar has told the paper that “A number” of Algerian and French nationals entered the largely IS-controlled district of Darzab in northern Jowzjan province in November.

He said at least two women were among the arrivals, who were travelling with a translator from Tajikistan as well as Chechens and Uzbeks, Dawar added.

European and Afghan security sources in Kabul confirmed Dawar’s claim that French citizens were among the fighters — though, one cautioned, “we do not know how many there are”, according to AFP.