The former Afghan President Hamid Karzai has met with the Indian Prime Minister Narendra Modi in New Delhi, the capital city of India. 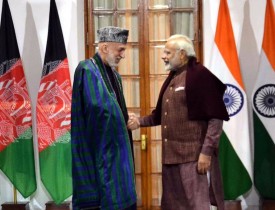 AVA- PM Modi in an online statement confirmed the meeting and said “Delighted to meet my friend Karzai in New Delhi.”

No further details were given regarding the meetign but the Indian officials privy of the meeting have said the two sides discussed bilateral ties between the two nations.

The officials further added that the two leaders discussed strategic bilateral ties, including India’s development assistance as well as cooperation in other key areas.

They also discussed the security situation in the war- torn country and in the region, the officials said.

India is considered as a key regional player in the reconstruction of Afghanistan having made massive investments on key infrastructure projects since the fall of the Taliban regime.

The United States Department of Defense, Pentagon, in its latest report has also said that the United States welcome additional support by the Indian government to Afghanistan, noting the country’s contribution to the reconstruction of Afghanistan.

In its latest report, Enhancing Security and Stability in Afghanistan, Pentagon said Pentagon called India as Afghanistan’s most reliable regional partner and the largest contributor of development assistance in the region.

The report further adds that this assistance includes civil development projects such as the Afghanistan-India Friendship Dam and the Afghan parliament building.