US, Pakistan Pursuing Own Interests in The Afghan War: Karzai

Karzai said US wants to establish permanent bases in Afghanistan to project power in the region, while Pakistan wants to turn Afghanistan into a client state. 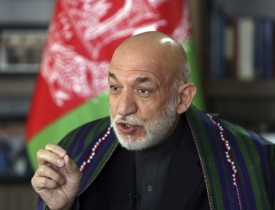 AVA- Afghanistan’s former president Hamid Karzai has said that the United States and Pakistan are pursuing their own interests in the Afghan war, calling on Washington to slap sanctions on Pakistani military and intelligence officials.

In an interview with Associated Press, Karzai said that Afghanistan is still in terrible shape sixteen years after the US-led intervention that toppled the Taliban regime.

Karzai said Washington wants to establish permanent bases in Afghanistan to project power in the region, while Pakistan wants to turn Afghanistan into a client state.

“In my view their intention is to keep us divided and weak so they can carry on their objectives in this region,” Karzai said. “They have their global politics and rivalries. They have China as a great rising power. They have Russia as a revitalized, re-energized great power on the world scene and they feel threatened and challenged.”

He said US forces are not in Afghanistan “to stop extremism.”

Karzai called on the United States to sanction Pakistani military and intelligence officials.

Meanwhile, the ousted governor of Balkh Atta Mohammad Noor has said that the government has failed to provide security to the people.

“$4 billion are spent annually,  but where is security,” asked Noor.

Critics have accused the government of monopolizing power instead of tackling national issues.

“Both from the political perspective and responsibility perspective, Afghanistan is now in a legal vacuum, this indicates that the situation is not too good, but it is very bad,” said Ahmad Wali Massoud, head of the Massoud Foundation.