Iranian President Hasan Rouhani on Wednesday questioned the legitimacy of demands for a fresh nuclear agreement with Tehran, after the leaders of the US and France called for a “new” deal. 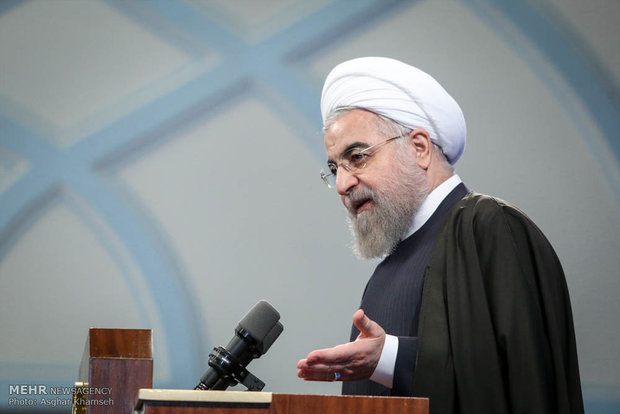 “Trump A Businessman, He Doesn’t Know about Politics and Law”, Iranian President Hasan Rouhani
Iranian President Hasan Rouhani on Wednesday questioned the legitimacy of demands for a fresh nuclear agreement with Tehran, after the leaders of the US and France called for a “new” deal.
AVA- “Together with a leader of a European country they say: ‘We want to decide on an agreement reached by seven parties’. What for? With what right?” Rouhani said in a speech.
Rouhani made the remarks on Wednesday during a ceremony in the East Azarbaijan province to mark the selection of Tabriz as the 2018 tourism capital of the Islamic tourism by the OIC member states.
Rouhani pointed out “with the Joint Comprehensive Plan of Action (JCPOA), we eliminated the accusations against Iranian nation.”
Stating that “we proved it to the world that Iranophobia was a lie,” he continued “the fact that you threaten banks and investors not to work with Iran is against what you pledged in the JCPOA.”
Iranian president went on to criticize the US President Trump’s rhetoric’s saying “if the JCPOA was bad and dangerous, why did you sign it? You (Trump) are a businessman and don’t know anything about law. Before deciding on the future of the JCPOA, say did you live up to your commitments?”
“The White House must first settle its previous debts and then make a new decision,” the Iranian president added.
He also said “the current problem of today’s world are politicians who don’t consider the consequences and different aspects of their words.”