President Ashraf Ghani on Wednesday held an emergency meeting on the security situation in eastern Nangarhar after yet another deadly attack in Jalalabad, the Presidential Palace said in a statement. 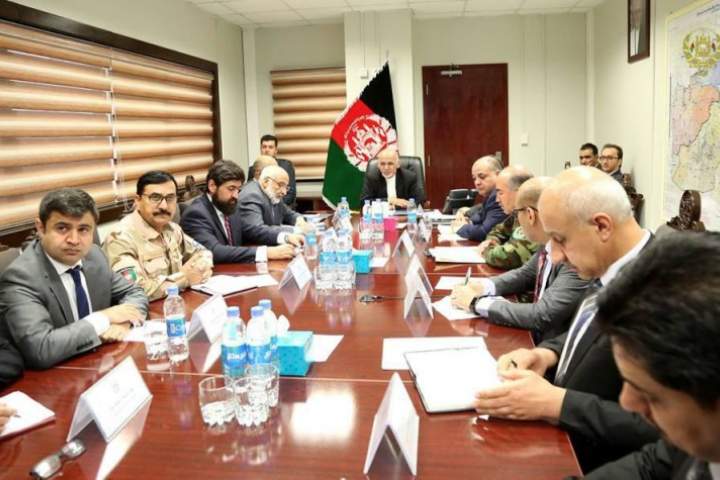 At the meeting Ghani ordered security to be stepped up in the province and ordered the Afghan National Army (ANA) to work with the Afghan National Police (ANP) police to secure the province, according to the statement.
Until now the security of the province and Jalalabad has been the responsibility of the police.
Provincial governor, Hayatullah Hayat, and 201 Selab Military Corps commanders held a video conference while Haneef Atmar, Ghani’s National Security Advisor; the National Directorate of Security (NDS) Chief Masoom Stanekzai; Gen Tariq Shah Bahrami, Defence Minister; Wais Ahmad Barmak, Interior Minister and other security officials – along with the president.
The statement said that the provincial governor, commanders of Selab Military Corps and the provincial NDS chief briefed Ghani of the security situation.
The provincial officials said: “Daesh has suffered heavily in Nangarhar and because of this they have started destructive attacks in Jalalabad.”
According to the statement “they also offered their suggestions to prevent enemy attacks and improve the security situation in Nangarhar province.”
After the briefing, Ghani ordered local officials to address problems the families of victims are facing and emphasized that the army must work closely with police to ensure better security in the province until a special unit can be deployed to Jalalabad.
A the meeting, Ghani also ordered the provincial NDS office to provide security to all government organizations.
The statement also noted that a security plan will be announced shortly that will outline long-term security measures in the province.
The statement comes in the wake of a string of deadly attacks in the past two months.
The latest, on Tuesday, lasted over six hours and was carried out on a refugee center in Jalalabad. At least 15 people were killed in the incident.
Officials said a car bomb was detonated close to the entrance of the compound at about 11.30am and was followed by two gunmen storming the building.
A number of employees were able to escape during the course of the day, but many remained trapped inside.
Tags:
Ghani Holds Emergency Meeting After Nangarhar Attack
Source : Afghan Voice Agency(AVA)
Wednesday 1 August 2018 14:19
Story Code: 168175 Copy text available
Featured news
Twitter suspends Iran Leader’s accounts
Philippine’s Duterte orders police to ‘shoot dead’ lockdown violators
Twenty trucks take US military equipment out of Iraq, into Syria: Report
Afghan forces kill, wound 9 Taliban militants in Jawzjan province
Official: Iran screens many Afghan, Pakistani pilgrims at borders
100 Taliban militants to be released from Afghan jails
1
Taliban says will not negotiate with team announced by Afghan government
2
US, EU, NATO welcome Afghan govt’s team for talks with Taliban
3
Taliban Must Not Raise Issues With Delegation: Omar
4
13 Taliban militants killed in W. Afghanistan
5
Afghan government to host Taliban delegation in Bagram, prisoners release postponed
6
Trump preparing to abandon Afghan government?
7
Taliban attack repulsed in Kandahar, 6 militants killed
8
19 Afghan forces killed in Takhar, Zabul attacks
9
Mike Pompeo urges Afghan politicians to form inclusive Govt
10
Afghan police find four tonnes of explosives in truck in Herat