A family in a remote part of Kabul has found their missing daughters after 21 years. 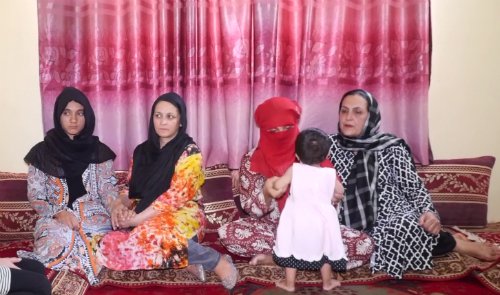 Tahmina and Zinat were abducted in Mazar-e-Sharif City in Balkh province when they were only two years old.
But the cousins, Tahmina and Zinat were the ones who initiated the search for their real family.
Zinat, who married a boy from the family they grew up in, has three children.
She said when they found out from neighbors that they were not biologically related to the family, they started searching for their parents and relatives.
“I told my story to everyone I met. I told them about the story of me going missing. We did not think that it would work. But it worked and now we found our family,” Zinat said.
Tahmina said she loved the family who raised her but she also wanted to find her real family.
The family that raised the girls live in a remote area in Aqcha district in Jawzjan province in the north of Afghanistan. Tahmina said they were very poor.
“We did not have any place to visit during Eid, so we stayed at home. We had hoped to visit our parents during these celebrations and spend time with them,” Tahmina said.
The girls meanwhile grew up believing they were sisters – when in fact they were cousins.
Their mothers, Friba and Zubaida, said they never stopped looking for their girls.
“We tried everything. I sat at the Rawza (Shrine) for 20 days when the girls went missing but they were never found,” said Friba, Tahmina’s mother.
“The girls told their story at a local restaurant, then the story was told to women farmers. Eventually the farmers recounted the story to women who were our relatives. This channel finally helped us find our daughters,” said Zubaida, Zinat’s mother.
Zinat’s husband, Kazim, is a farmer and went to work in Mazar after his parents passed away.
“The two girls were with another family. They could not afford food due to poverty. They gave their food to my parents,” said Kazim.
However, details of how they went missing are not yet clear but Zinat’s biological brother has threatened the Jawzjan family with legal action.
“I will send them to court if I find those people right now,” said Siawash Azizi, Zinat’s brother.
The girls were reunited with their family only two days ago.
Source: Tolo
Tags:
Family Finds Missing Daughters After 21 Years
Source : Afghan Voice Agency(AVA)
Thursday 16 August 2018 09:09
Story Code: 168948 Copy text available
Featured news
UAE firm to invest in 3,000 MW solar power project in Afghanistan
21 Civilians Killed in 10 Days in Arghistan District of Kandahar: AIHRC
COVID-19: AFC 2022 World Cup qualifiers postponed to 2021
Russia to start COVID-19 vaccine production in 2 weeks
Surging Cases of Polio Create New Health Challenge in Afghanistan
Barcelona confirm one player has tested positive COVID-19
1
Thousands cross border after Spin Boldak opens for one day only
2
Schools to Reopen in Afghanistan on Aug 22: Gov’t
3
Polio vaccination campaigns resume in Afghanistan after coronavirus pause
4
180 Afghan Sikhs and Hindus Headed for India
5
Global coronavirus cases cross 20.2 million
6
Putin says Russia’s Health Ministry has approved world’s FIRST Covid-19 vaccine – his own daughter has been vaccinated
7
India records over 60,000 new COVID-19 cases
8
Surging Cases of Polio Create New Health Challenge in Afghanistan
9
Russia to start COVID-19 vaccine production in 2 weeks
10
21 Civilians Killed in 10 Days in Arghistan District of Kandahar: AIHRC