President Ashraf Ghani on Tuesday night chaired a meeting over Kabul security and said that “all security sectors must be accountable” after insurgents’ rocket attacks on the city, Ghani’s Office said in a statement. 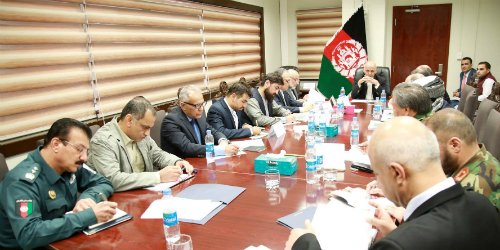 “The security and defence sectors reported over the rocket attacks on parts of Kabul city and on their action to prevent the attack,” Ghani said.
The president thanked the special and the air force for their action against the attack, the statement said.
Ghani said the incident will not be treated indifferently and all security and defence sectors must be accountable.
"People want accountable government and government must give answer over the incident which has raised the concerns of the people and the people should be given clear answer," Ghani said.
Ghani directed security and defence forces to boost security measures in Kabul and other provinces to prevent insurgent attacks.
The meeting held hours after, a group of Daesh insurgents launched rocket attack in different part of the Kabul city including Presidential Palace.
The attack on Kabul ended on Tuesday at about 12 noon after a three-hour battle between security forces and insurgents in Eidgah area in PD1 of Kabul.
At about 9am on Tuesday, the group launched a rocket attack on the city, also targeting the Presidential Palace, while President Ashraf Ghani was delivering his Eid message.
Half way through his message, the thud of falling rockets could be heard in the background. Without flinching, Ghani interrupted his speech and said: “If they are thinking the rocket attack will keep Afghans down, they are wrong.”
Officials said at least 12 rockets were fired but Kabul residents said they counted as many as 22.
Security forces sealed off the area from where the rockets were being launched but clashes between insurgents and security forces lasted until about 12 noon.
Additional explosions were heard in the area from about 10am – which were reportedly RPG’s fired by security forces. A military helicopter was also seen firing on the insurgent’s hideout during this time.
By 12 noon plumes of black smoke could be seen rising from the area as at least one building nearby caught fire.
Firefighters doused the flames as soon as the situation had been brought under control.
Six people including security forces members were wounded in the attack.
This comes just two days after Ghani announced a conditional ceasefire starting Monday with the Taliban.
The group has also not yet responded to this.
Tags:
Security Sectors Must Be Accountable, Ghani Says
Source : Afghan Voice Agency(AVA)
Wednesday 22 August 2018 11:02
Story Code: 169279 Copy text available
Ghani says attempts being made to misuse youths for sparking divisions
Featured news
Afghan, Pak Officials Discuss Abdullah’s Upcoming Pakistan Trip
Gen Miller: Taliban Attacks Have Intensified, Violence Needs To Slow Down
Taliban Kill 5 Members Of A Family In Badakhshan
NEA Announces Result of Entrance Exam
Nearly 500 pilot whales stranded in Australia; 380 dead
United Nations Should Establish A Committee For Afghan Peace Process: Shavkat Mirziyoyev
1
Ghani Arrives in Bamyan Province
2
60 security forces killed in one week since beginning of intra-Afghan peace talks
3
Negotiators Continue to Struggle on Talks Agenda: Intra-Afghan Negotiations
4
Intra-Afghan Negotiations: Progress Made over Talks Agenda, Nadery Says
5
MFA: UNSC Support For Peace Talks With Taliban ‘Highly Encouraging’ For Afghanistan
6
Ghani in UN Speech Reiterates Call for Ceasefire
7
Afghanistan- Taliban Against Formation of Interim Gov't
8
Abdullah: Expected For Taliban To Also Call For Ceasefire In Afghanistan
9
Afghan Forces Repulse Panjshir Attack
10
14 Afghan Forces Killed in A Taliban Attack