Th youths in Mazar-e-Sharif city, the provincial capital of northern Balkh province, have taken a lead in the production of the first electric Rickshaws in Afghanistan. 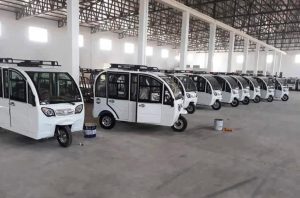 Assembled locally in Mazar-e-Sharif city, the electric Rickshaws can travel for almost three hours with its battery capacity, to cover a distance of at least 70 kilometers.
The locally assembled electric Rickshaws – the first of its kind in Afghanistan, can carry at least four passengers, to cover 70kms distance over a period of three hours which is the limit of its battery life for a non-stop travel.
The deputy head of the firm producing the electric Rickshaws in Mazar-e-Sharif city, Mustafa Niazi, said it will take almost three hours to charge the battery of the rickshaw and the stored energy could be used to cover a distance of at least 70kms.
Niazi further added that the Rickshaws are locally being built and assembly plant has been established with the personal financial resources, without the financial support of anyone else.
He said it took three days to build a electric Rickshaw locally with modern innovative characteristics, including reverse camera capability.
According to Niazi, at least one thousand such Rickshaws have been assembled locally.
Niazi said the youths have several other innovative plans similar as electric Rickshaws which would be implemented provided that the government supports them.
The roll-out of the locally assembled Rickshaws has been widely welcomed in Afghanistan with the observers believing that the electric rickshaws will not only help in resolving the growing traffic issues but will also have positive impact on the living environment of the country.
Tags:
first e-Rickshaw Mazar-e-Sharif city
Source : Afghan Voice Agency(AVA)
Monday 3 September 2018 08:49
Story Code: 169907 Copy text available
Explosion in Mazar-e-Sharif city leaves 3 dead, wounded
Security beefed up across Afghanistan for celebration of New Year Day
Police among 11 injured in Mazar-i-Sharif roadside bombing
Turkish language center opens in Afghanistan
The new building of "Balkh Bastan" high school inaugurated in Mazar-e-Sharif
Featured news
Imran Khan: Pakistan Contributing ‘Positively’ To End Violence, Bring Peace To Afghanistan
Blast in Kabul kills three, wounds 12
Peshawar blast: At least seven dead in Pakistan school attack
Saudi funds $10 million program to help returnees and IDPs
4 Negotiators Return Home Empty Handed, Freezing Peace Talks in Doha
Car Bomb Targets Police Special Unit in Khost
1
Afghan-Pakistan Customs Officials, Traders Meet At Torkham
2
With Increased Crop Yields, Harvest Festival Celebration Held In Bamiyan