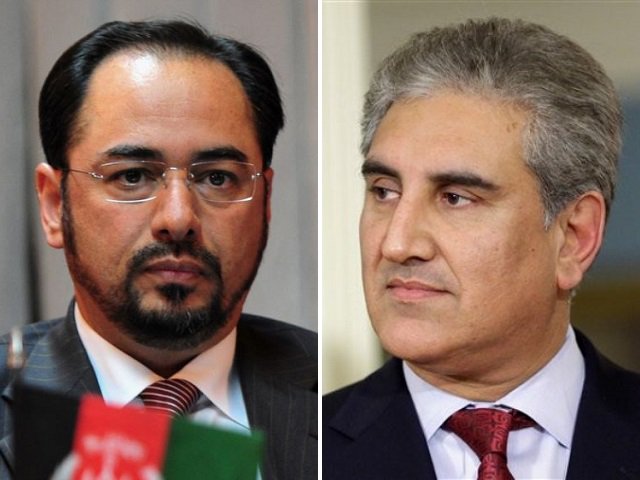 Expressing the greetings and best wishes of the government and people of Afghanistan for Pakistan, Rabbani said that he looked forward to strengthen ties between the two countries, Pakistan’s foreign ministry said in a statement.
For his part, Qureshi reiterated that as close neighbors, peace and prosperity of the two countries are interlinked. He also highlighted the need to work together for achieving lasting regional peace.
Both sides appreciated improvement in relations since the launch of Afghanistan Pakistan Action Plan for Peace and Stability process in May 2018, according to the statement.
The two leaders agreed that the next round of APAPPS would be soon held in Islamabad. They also welcomed the holding of joint Pak-Afghan Ulema Conference in Islamabad, the dates of which are being finalized, the statement said.
The conversation comes days after Pakistan closed its embassy in the Afghan city of Jalalabad over alleged interference by the provincial governor.
The sides also discussed the issue. Qureshi requested the Afghan government to restore the previous security arrangements, so that the consulate’s normal functioning could be resumed.
Till resolution of the issue, Pakistan would continue issuing visas to patients or students residing in the jurisdiction of the consulate as an emergency measure, the statement said.
During the call, Rabbani extended an invitation to his counterpart to visit Afghanistan at an early date, which he accepted.
Tags:
Islamabad to host Afghanistan-Pakistan clerics conference
Source : Afghan Voice Agency(AVA)
Monday 3 September 2018 14:59
Story Code: 169939 Copy text available
Featured news
Top Pentagon Leaders Can’t Say If Any Secret Side Deals Are Part of The Afghanistan Peace Agreement
UNHCR Welcomes EU’s Humanitarian Aid of €21 Million for Afghan Refugees
Deadly roadside bomb rips through Taliban vehicle in Balkh province
Japan provides 3.8m USD for sustainable management of world heritage site in Bamyan
Kabulov to attend signing ceremony of US-Taliban deal
Iran cannot be ignored on Afghan issue: US expert
1
Afghan peace treaty signed in the presence of Pakistan: Shah Mehmood
2
Iran urges U.S. to withdraw troops from Afghanistan after peace deal announced: Newsweek
3
Significant Drop in Taliban Attacks in Early Hours of RiV: Defense Minister
4
Afghan forces convoy attacked in Kandahar
5
First-ever Afghan Freight Train Leaves Karachi for Kandahar
6
President Ghani Tasked Commission for Holding Inauguration ceremony
7
Clashes reported on first day of Afghan truce
8
China Has Done Tremendous Job in Containing the Virus: Afghan Amb.
9
Civilians celebrate as partial truce mostly holds in Afghanistan
10
Memorial monument for media martyrs in less than a month: Sharq