The Palestinian Authority (PA) reportedly “completely rejects” an offer by the United States for formation of a Jordanian-Palestinian confederation as an apparent substitute for an independent Palestinian state. 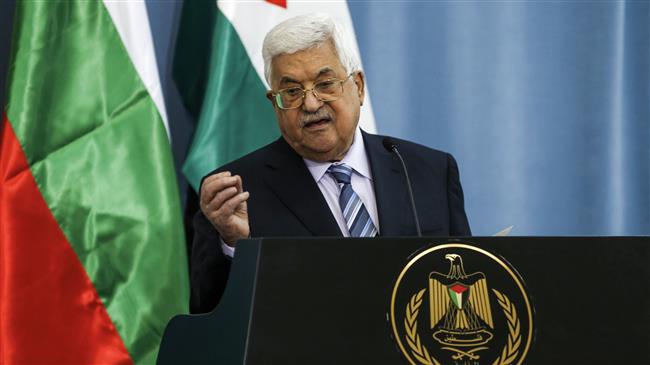 AVA- PA chief Mahmoud Abbas, who was speaking to Zionist movement Peace Now and Zionist lawmakers in Ramallah on Sunday, said he had been offered a “political plan” by the United States negotiating team that was based on formation of the federation, Ha’aretz reported.
He told the team, which includes US President Donald Trump’s advisor and son-in-law Jared Kushner, and the US Middle East envoy Jason Greenblatt, that “he would agree to such an offer only if Israel is a part of the confederation,” the paper added.
"I was asked if I believe in a federation with Jordan," Abbas said, adding, "I answered: Yes, I want a confederation with Jordan and Israel. I have asked the Israelis if they would agree to such an offer."
The US is to unveil a proposal targeting the Palestinian- Zionist conflict, which Trump has hailed as the “deal of the century.”
Back in May, Zionist intelligence website DEBKAfile reported that the plan gave the Palestinians limited sovereignty over about half of Tel Aviv-occupied West Bank and set Abu Dis, east of the occupied holy city of Jerusalem al-Quds, as their capital. Palestinians have historically sought east al-Quds as the capital of their future state.
Last year, Trump recognized al-Quds as Zionist regime’s "capital," and moved the US embassy to the city in May.
The PA stopped recognizing the US negotiation role afterwards, saying it could no longer trust Washington.
Abbas likewise said the US was "hostile towards the Palestinians.”
The US plan would also reportedly give Palestinians’ sovereignty over the Gaza Strip on the condition that the Palestinian resistance movement Hamas gave up its arms.
According to the US Ambassador to Tel Aviv David Friedman, Washington did not have an exact deadline for unveiling of its plan, and would not present it at the upcoming United Nations General Assembly session.
Adding to the air of secrecy surrounding the plan, Greenblatt, meanwhile, said, "We will not discuss any specific ideas or private conversations that may or may not have been had with leaders in the region.” He was referring to the US team’s talks about the plan with regional states.