Syria’s Ambassador to the United Nations Bashar al-Jaafari says military operations against terrorist factions in the militant-held province of Idlib are a sovereign right of the Arab country and liberating the northwestern region “will be the last nail in the coffin of terrorism.” 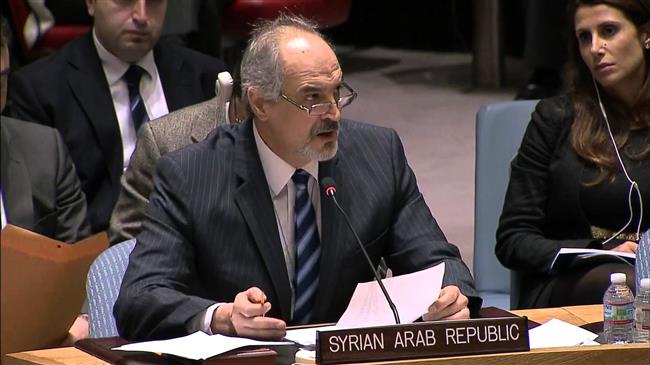 AVA- Addressing a Friday United Nations Security Council meeting to discuss the expected military operation in Idlib, Jaafari further said Damascus' right to launch the offensive is also guaranteed by international law, the UN Charter, and Security Council resolutions on counter-terrorism.
He added that the Idlib operation would be a response to the demand of millions of Syrians, including the people of Idlib who are besieged by terrorists.
Jaafari also said that certain sides’ defense of terrorists in Idlib is a desperate attempt to protect the militants and “extend their expiration date” so that they can transport and present them as “very moderate opposition” in other countries.
With the help of Iran, Russia and Lebanon’s Hezbollah resistance movement, the Syrian army is preparing for the Idlib operation, a strategically-important region bordering Turkey and close to the coastal Latakia province.
Idlib also hosts Turkish-backed militants fighting against the government of Syrian President Bashar al-Assad. Turkey, whose army has a string of observation posts around the edge of the militant area, has warned against such an offensive.
Syria, however, is facing the threat of being hit by the US and its allies if a so-called chemical attack takes place in the province.
The US has accused the Syrian government of attacking civilians with chemical weapons in previous operations, including in Douma near Damascus and in Khan Sheikhun, in Idlib. The Syrian authorities have strongly denied any involvement in either case, saying the attacks had been carried out by militants to slow Syria’s progress in the fight against terror.
Syria and its allies, including Russia, believe a similar scenario could be staged in Idlib. Moscow has already submitted evidence to the United Nations and the Organization for the Prohibition of Chemical Weapons (OPCW) showing that the terrorists in Idlib are preparing to set up another false flag chemical attack to frame Damascus.
Damascus and Moscow have warned that the US, along with Britain and France, is gearing up for a new military attack against Syria as the army prepares for the liberation of Idlib.
The US has reportedly drawn up a preliminary list of facilities in Syria that could be targeted in case of a false flag chemical attack in Idlib.
Elsewhere in his remarks, Jaafari further said that Syria had already submitted information to the UN Security Council that a false flag chemical attack in Idlib was being prepared by terrorists and the so-called White Helmets aid group to “lay the blame on the Syrian government to provoke a new aggression against” the Arab country.
“Syria reiterates its demand that the three countries [the US, the UK and France] which have influence over terrorist organizations must use that influence to prevent them from using any chemical weapons or materials that could be used as an excuse to elicit direct intervention and aggression by their supporters against Syria,” he added.
Jaafari further stressed that the Syrian government was determined to fight against foreign-backed terrorist factions in the country and to liberate the remaining militant-held Syrian territory, including Idlib province, from the grips of terrorists.