Afghanistan's lawmakers are set to review the bilateral security agreement with the United States as violence flares in the country. 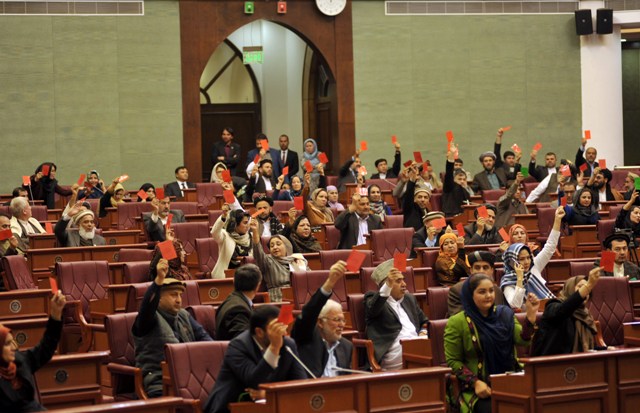 The idea was put forward by some lawmakers in the Lower House on Monday and it was approved by majority of the MPs through voting on Wednesday.
The agreement allowed U.S. troops to stay in Afghanistan after combat mission of U.S.-led NATO force in the country ended in 2014. It also allows the U.S. to keep bases in the country.
Deputy speaker of Lower House said that the agreement has not been effective and asked the parliamentary commission of security and defense to start reviewing the pact.
Meanwhile, Hamid Karzai, a former Afghan president, who refused to sign the pact while in office, at a gathering in Kabul criticized the U.S. for what he said failure to implement its pledges.
After signing of the deal, the then U.S. had said that it would help advance “our shared interests and long-term security of Afghanistan.”
However, the security condition is worsening with more number of civilians and Afghan forces being killed.On Tuesday, a suicide attack in eastern province of Nangarhar killed 68 people and wounded 165 more.
The Afghan government, however, emphasized on the importance of the importance of the deal in strengthening the Afghan security forces.
Shah Hussain Murtazai, the president’s deputy spokesman, said that reviewing the deal would only benefit the terrorists
Tags:
Afghan parliament to review security pact with U.S.
Source : Afghan Voice Agency(AVA)
Wednesday 12 September 2018 18:24
Story Code: 170622 Copy text available
Kandahar collision leaves 15 dead, 25 wounded
Beating of a woman in public by a mob in Takhar sparks furor
Haqqani Network Commander Killed in North Waziristan Drone Strike
12 Year-Old Girl Beaten, Tortured to Death by Husband in Ghor
Killing of Al-Qaeda leader an example of Afghan Special Forces lethality: Nicholson
Featured news
Afghanistan Schedules Meetings To Prepare For Intra-Afghan Talks
Pakistan Opens Two More Border Crossings For Trade With Afghanistan
It will be clear next week when talks with Taliban will begin: Ghani
Pakistan Army Rubbishes India Claims of Troop Deployment in Gilgit-Baltistan
It will be clear next week when talks with Taliban will begin: Ghani
COVID-19: Long-Shut Oxygen Factory Gives Free Refills In Kabul
1
Khalilzad Begins New Round Of Visits For Afghan Peace Process
2
US Caesar Act aims to prevent Syria from regaining key regional role: Lebanon’s Berri
3
Taliban dismiss reports it took money to kill US troops
4
Dispute on Abdullah's Side Reportedly Delaying Cabinet Choices
5
Roadside Bombs Kills 6 Civilians in Helmand
6
Over 40 Taliban Killed By Afghan Forces
7
Taliban release 21 more prisoners of the Afghan government
8
India Instigating Terrorism Against Pakistan: Moeed Yusuf
9
Khalilzad, Intl Community Condemns AIHRC Attack
10
Ministry of Interior Takes Measures To Prevent Recruitment of Minors Into Security Forces