Pakistan approached Afghanistan earlier this year, indicating its willingness to discuss the resumption of trade between Afghanistan and India through the Pakistani land route, says a senior US diplomat. 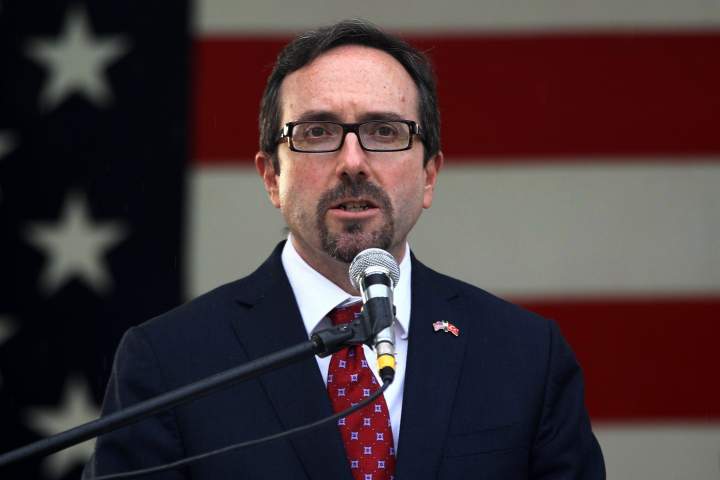 AVA- In an interview to India’s Economic Times newspaper, Ambassador John Bass said that reopening land routes between South and Central Asia will benefit all countries in the region.
Pakistan does not allow India to use the land route for trading with Afghanistan, arguing that technical and strategic issues connected to transit trade should be resolved first.
“A couple of months ago, for the first time the Pakistani government expressed a willingness to start talks with its Afghan counterparts for parameters to enabling trade between India and Afghanistan through Pakistan,” Mr Bass said.
The US ambassador to Afghanistan also said that Indian firms were gradually increasing their investments in Afghanistan. Last year’s trade show in Delhi led to $27 million of investments at the event itself, and another $200 million of “prospective” investments from Indian companies, much of which had materialised, he added.
Ambassador Bass told the Indian newspaper that a political settlement in Afghanistan was in Pakistan’s long-term interest. “Increased trade in both directions, increased connectivity through central and south Asia through Afghanistan — those are all missed opportunities if Pakistan has its sole focus on perpetuating the status quo,” he said.
The US envoy said that India raised the issue of US sanctions on Iran when US Secretary of State Mike Pompeo and Defence Secretary Jim Mattis visited New Delhi earlier this month for Two-plus-Two talks.
The Indians were particularly interested in knowing how the sanctions would impact Chabahar port, which was built in Iran with Indian assistance for connecting India with Central Asia through Afghanistan.
The Indian government conveyed its perspectives “on the importance of Chabahar as a means to expand bilateral trade and help improve Afghanistan’s connectivity with South Asia,” he said.
“We are processing and evaluating how best to reimpose sanctions on Iran, with the Iranian regime’s malevolent behavior and its activities in destabilizing its neighbors,” Ambassador Bass said.
“My government is still thinking through how Chabahar factors in the reimposition of the toughest sanctions that we believe need to be put in place to hold the Iranian government accountable for its action.”
He said the US administration was reviewing the sanctions to see how to deal with such issues, without hurting the US objective of persuading Iran to change its policies.
Ambassador Bass said the US realised that the conflict in Afghanistan could not be resolved through military means alone. “No one in the US government is saying at this point that we expect this conflict to end with a military victory. We believe that this conflict will end with a political settlement,” he said.