Iran Reiterates Need for Reinvigoration of Anti-Terrorism Efforts in Afghanistan

Iran's Ambassador and Deputy Permanent Representative to the UN Eshaq Al-e Habib underlined the necessity for accelerated and increased efforts to fight against the terrorist groups in Afghanistan. 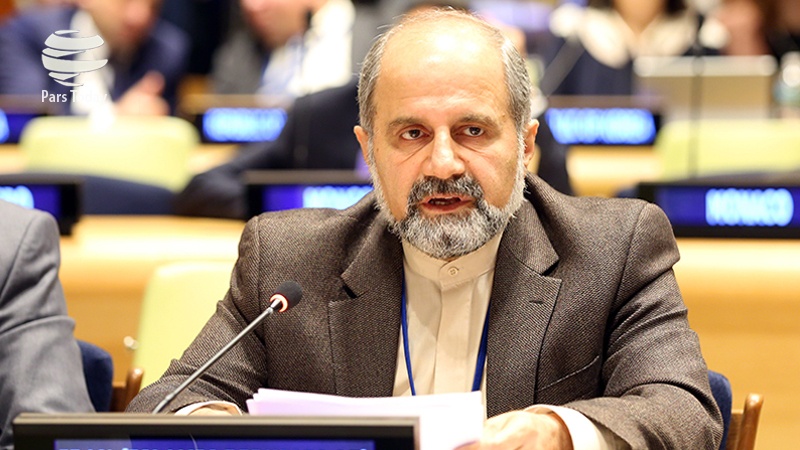 AVA- Recent attacks by terrorist groups in Afghanistan and the rising civilian death tolls show that terrorism is a major issue in the country, Al-e Habib said, addressing a UN Security Council meeting on 'The Situation in Afghanistan'.
He also emphasized that Tehran will support Kabul in fighting extremism, as well as Afghanistan development in other spheres, including trade and economy.
"At a time when Afghanistan experiences such severe hardships, what it needs most is further robust and sustained international support. This is of the utmost importance in order to respond to the existing challenges of this country; for achieving a lasting peace and stability in this country and the region; and for promoting its sustainable socio-economic development," Al-e Habib said.
He noted that as a neighboring country, Iran continues to contribute to and support the promotion of Afghanistan’s stability, political-security conditions and socio-economic development, and said, "Certain efforts are underway to ensure that such a contribution is carried out in an institutionalized and a sustained manner."
"We also continue our endeavors in promoting regional efforts supporting peace, stability and development in Afghanistan. In this regard, the development plan of Iran’s Chabahar Port will indeed have a significant impact on the promotion of trade and economic cooperation with Afghanistan. Any attempt to disrupt this vital project will only play into the hands of those who do not want peace and progress for the Afghan people," Al-e Habib said.
"Security remains Afghanistan’s major challenge. It is one of the main requirements for long-term stability and socio-economic development of Afghanistan. Therefore, enhancing its security situation should be pursued as a high priority," he added.
"In this context, counter-terrorism efforts must have the highest priority. The recent terrorist acts claiming the lives of innocent civilians further proves that the threat of terrorist groups, including Daesh (the ISIL or ISIS), should not be underestimated. Iran will continue to support Afghanistan’s Government in its struggle against terrorist groups," Al-e Habib underscored.
"The need for sustained regional and international support in countering terrorists in Afghanistan is crucial. However, it needs to be achieved in a realistic manner," he said, adding that another source of concern in the security field in Afghanistan is the increase in civilian casualties.
"This includes the targeting of Shia communities and religious sites resulting in high civilian casualties. This trend needs to be prevented," Al-e Habib said.
"To enhance the democracy, political institutions, and national unity in Afghanistan, every effort should be made to ensure that upcoming elections be held and result in success for the country. Iran will continue its constructive role in this regard," he added.
"We continue to support and commend the dedicated work of UNAMA and the United Nations agencies in providing development and reconstruction assistance to Afghanistan. Sustained ownership and partnership with the Afghan Government are needed in order to utilize the best potential of UNAMA and the United Nations system to deliver the necessary services in priority areas as advised by Afghanistan’s Government," Al-e Habib said.
"Despite the progress achieved, there remain challenges and threats in Afghanistan that need further sustained international support. In this context, we welcome the convening of the Geneva Ministerial Conference on Afghanistan which is to take place in November," he added.
Al-e Habib noted that the international community should remain resolute in securing a stable and prosperous Afghanistan, and said, "In turn, Iran will continue its full support to the fraternal people and Government of Afghanistan in their endeavor to achieve lasting peace and prosperity in their country. This is what they deserve."
In relevant remarks on Tuesday, Russian Ambassador to the United Nations Vassily Nebenzia warned that the ISIL is on the rise in war-torn Afghanistan, and the group's numbers could soon grow to up to 10,000 members in the country.
"At the focus of our close attention is a surge of terrorist activity by the Afghan wing of ISIL, whose ranks are growing largely due to foreign fighters with battlefield experience in Syria and Iraq," Nebenzia said.
"According to our information, the number of ISIL adherents may reach 10,000 individuals," he added.