In reaction to the Wall Street Journal’s report, the U.S. Ambassador in Kabul John Bass on Tuesday said that the United States is committed to helping the Afghan electoral commissions and the government to hold the presidential elections in April next year. 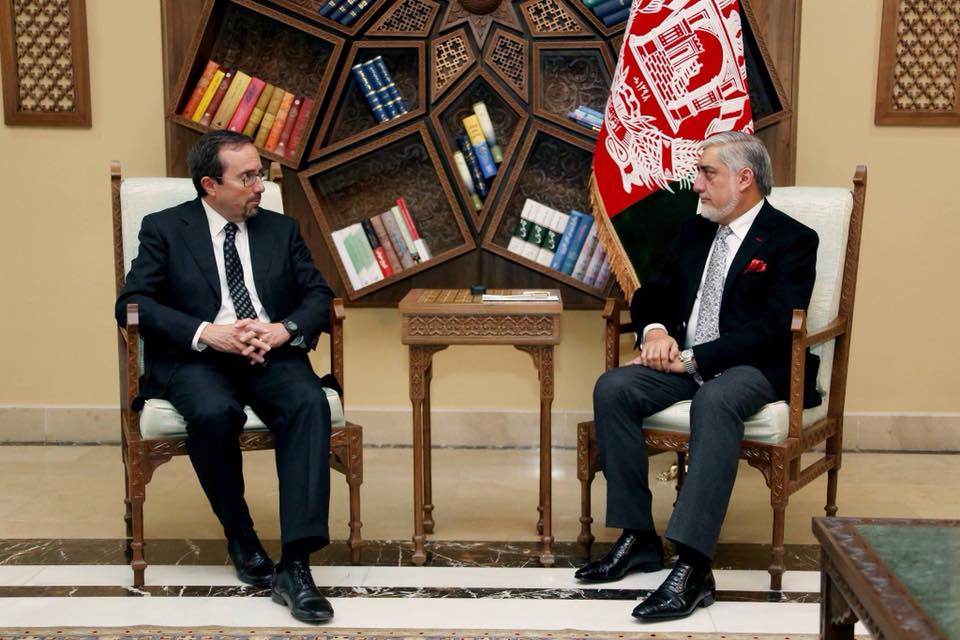 The WSJ reported that the Trump administration is discussing whether to press the Afghan government to suspend coming presidential elections, as the U.S. seeks to engage the Taliban in talks to end the 17-year war.
According to the report, to urge a suspension of the April election was an idea raised by U.S. special envoy for peace in Afghanistan Zalmay Khalilzad in talks with various stakeholders and intermediaries.
Following the WSJ report, the U.S. ambassador in Kabul said: “We remain committed to helping the electoral commissions and the Afghan government prepare for presidential elections in April 2019. Timing of Afghan elections is for Afghans to decide,” Bass tweeted.
Earlier in the day, Chief Abdullah Abdullah met with the ambassador Bass and discussed a range of issues including elections, the peace process, and the Washington-Kabul relations.
In the meeting, Abdullah said the presidential elections will be held on due time, adding that
peace is a separate issue and is not related to election.
This comes as President Ghani’s office spokesman Haroon Chakhansoori said that the government is “fully” committed to holding the coming presidential election as “per the Afghan constitution, and the date determined by IEC [the Independent Election Commission].”
“Continuity in a democratic process is a must and any other proposal than the will of Afghans which is outlined in our constitution is simply not acceptable,” Chakhansoori tweeted.
Share
Tags:
U.S. Committed to Timely Afghan Presidential Elections: Envoy
Source : Afghan Voice Agency(AVA)
Tuesday 13 November 2018 17:34
Story Code: 173997 Copy text available
Muslimyar reacts at the remarks of Putin’s envoy for Afghanistan
Atmar discusses mutual interest with India’s envoy
Afghanistan, US, Taliban to fail by adopting military option: Pak envoy
ACCESS TO JUSTICE FOR AFGHAN WOMEN VICTIMS OF VIOLENCE 'SEVERELY INADEQUATE' – UN ENVOY
Pakistan willing to open Afghan land route for India: US envoy
Featured news
President Ghani: We are fully committed to putting an end to the war in Afghanistan
President Assad says Syrians will liberate whole country from grips of terrorists
New China Virus Cases Drop for Third Day as Toll Passes 1,600
Zionist Warplanes Attack Resistance Sites in Gaza
Sayyed Nasrallah: Trump’s Two Recent Crimes Usher Direct Confrontation with Resistance Forces
UN Chief To Address Afghan Refugee Conference During Pakistan Visit
1
40 days ago, US killed a man who first rushed to Iraq’s aid against Daesh
2
General Suleimani’s Will Urges All Muslims to Preserve Unity in Face of US Intervention
3
Iran to Israel: Don’t you dare take any foolish action against our interests in Syria
4
Syrian parliament recognizes Armenian genocide amid Ankara-Damascus tensions
5
Afghan sports coach says she will flee after dog shot dead
6
Has Afghanistan’s security taken precedence over Iraq for the US?
7
Afghanistan Launches National Trade Policy
8
Trump conditionally approves peace deal with Taliban
9
US service member killed in non-combat incident in Afghanistan
10
Afghanistan Reconstruction Programs Suffered More Than 5,000 Casualties in 16 Years