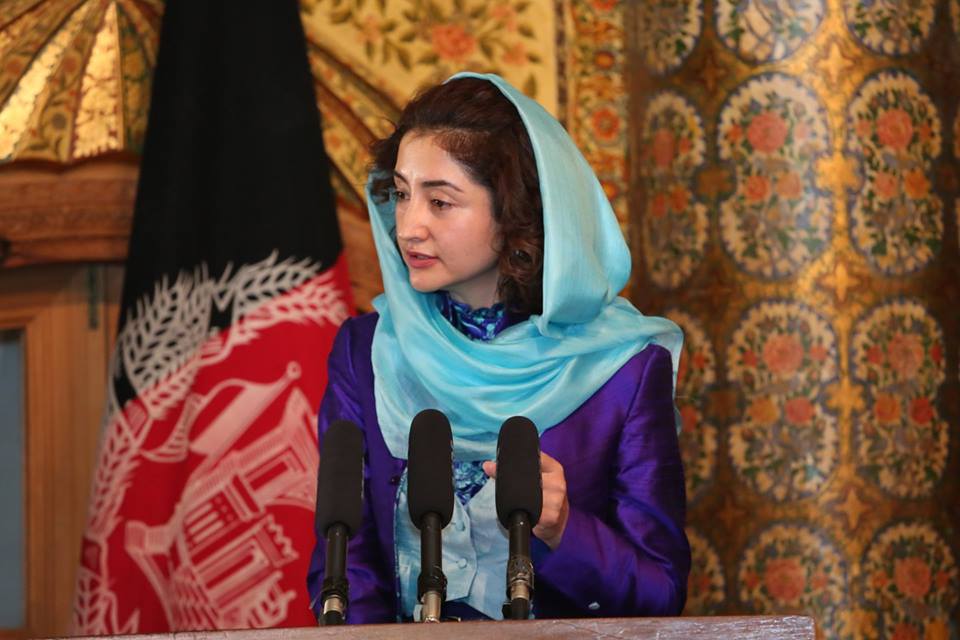 She announced her resignation during a press conference in Kabul today as she emphasized on the importance of transparency and accountability as a key principle which the government officials should adhere to, specifically after stepping down from their post.
Developments in ‘One UN in Afghanistan’ are considered as one of the major achievements of President Mohammad Ashraf Ghani’s senior adviser in UN affairs.
According to the Office of the Senior Presidential Adviser in UN Affairs, the process of ‘One UN in Afghanistan’ has resulted in establishment of coordination in UN activities in Afghanistan and has also paved the way for accountability, transparency, effectiveness of UN activities, reduction in expenses, durability of the UN programs, and has increased the sovereignty of the Afghan nation.
Some UN agencies have been shifted to UNOCA Compound in Kabul which has resulted in prevention of millions of Dollars in expenses as well as the scattered activities.
According to the Office of the Senior Presidential Adviser in UN Affairs, around 20 UN agencies are currently operating under one leadership under the ‘One UN in Afghanistan’ process and work on one program with a long term strategy and in accordance with the demands of the Afghan government and people.
In the meantime, the Office of the Senior President Adviser in UN Affairs said restoration works in certain parts of Haram Sara Palace, changes in the palace in accordance with the president’s perspective, turning the palace into a citizen-centric service institution, collection of remaining items from the Palace and confirmation of the historic value of the items with the support of UNESCO, National Meuseum, National Archives, Feroz Koh Institute, and Ministry of Information and Culture are among the other major activities of the Office of the Senior Presidential Adviser for UN Affairs.
Afghanistan also obtained the membership of 1945 Hague Convention for the first time, according to the Office of the Senior Presidential Adviser for UN Affairs.
Source : Afghan Voice Agency(AVA)
Saturday 24 November 2018 15:18
Story Code: 174623 Copy text available
Featured news
Pullout of 8,000 Troops by November Not Only Option: Esper
Iran to Reopen Border with Turkmenistan on June 1
COVID-19: Over 350,000 Kabul Residents Exempt From Paying Water and Power Bills
Ten killed in highway crash in Faryab
COVID-19 in Bamiyan: Saighan District Fully Quarantined; Face Masks Mandatory in Cities
Afghan Futsal goalkeeper tests positive for Coronavirus
1
Findings from Afghanistan war crimes investigation will cause 'distress' for some elite soldiers, judge warns
2
Peace Talks Ensure Afghanistan not a ‘Safe Harbour’ for Terrorists: US State Department
3
Pentagon Report Suggests the US-Taliban Deal Was Inked in Afghan Blood
4
Around 2,000 Taliban prisoners to be released
5
US Secretary of State Urges Afghan Gov’t, Taliban to Refrain From Violence After Eid Ceasefire
6
How the Taliban Outlasted a Superpower: Tenacity and Carnage
7
COVID-19: More than 12,000 Cases in Afghanistan
8
Afghan government to release 900 Taliban prisoners today
9
Trumps Considering Full Troop Pullout from Afghanistan
10
Afghan security institutions reject report half of forces have coronavirus