Russian Foreign Minister Sergei Lavrov says the United States is using the Daesh Takfiri terrorist group as a pretext to maintain its military presence in Syria and views the terror outfit as an ally to push regime change in the Arab country. 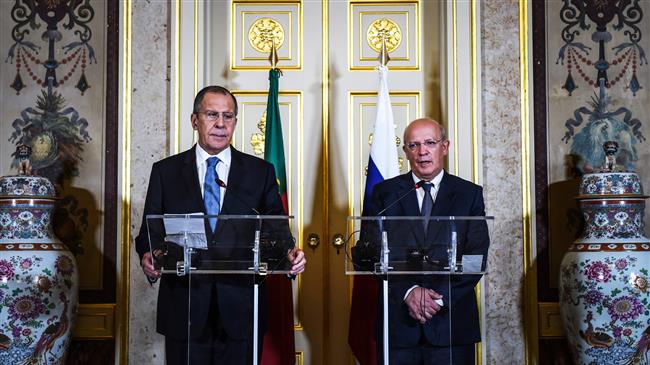 AVA- Lavrov, who was speaking at a joint press conference with Portuguese Foreign Minister Augusto Santos Silva in Lisbon on Saturday, said the US has set conditions for defeating Daesh, which indicates Washington has a “covert agenda in Syria."
“The US State Department has declared that Daesh has not been completely defeated and that the main condition for its defeat is regime change in Syria and the withdrawal of any Iranian or pro-Iranian units from the country,” said Lavrov.
“This confirms my theory that the Americans view Daesh as an excuse for their presence in Syria and almost as an ally in the fight against the Syrian regime. In other words, the main task [for Washington] now is regime change, not defeating Daesh.”
Russia’s top diplomat said the main remaining hotbed of Daesh activity in Syria is now located on the east bank of the Euphrates River, where the US runs military bases.
There are several thousands of militants in the area around the settlement of al-Tanf in southern Syria, "where the United States has illegally created a zone which they control with a radius of 55 kilometers", said Lavrov.
Those militants are regarded by the United States as “off-limits, allowing the Americans to make excuses for their presence” on the Syrian territory, he said.
Earlier in October, Russian President Vladimir Putin warned that Daesh was expanding its presence in the Syrian regions controlled by Washington and its allied Kurdish militants, revealing that the Takfiri terror outfit had managed to take hundreds of people hostage in those areas.
The US, along with a coalition of its allies, has been conducting airstrikes inside Syria since September 2014 without any authorization from Damascus or a UN mandate. It has repeatedly been accused of targeting Syrian civilians and infrastructure.
On the contrary, Russia has been providing the Syrian army with both advisory and on-the-ground assistance in its counter-terrorism battles. Thanks to that help, Syrian armed forces have managed to liberate most of their homeland from the clutches of terrorists.
At Damascus’ request, Tehran has also been providing military advisory support to the Syrian military fighting foreign-backed terrorism and militancy since 2011. The Islamic Republic says it will maintain the role as long as it is required by the Syrian government.