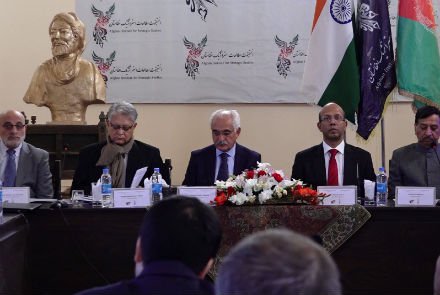 AVA- Speakers at the meeting discussed issues around security and the future relationships between Kabul and New Delhi.
This comes amid accelerated efforts around the Afghan peace process.
The former national security advisor Rangin Dadfar Spanta addressed the meeting and said Afghans and Indians will be the main losers of the Afghan peace talks if a peace settlement in the country results in interference in Afghanistan by countries that support insurgency.
Spanta said peace efforts should not provide grounds for this to happen.
Speaking about insurgency and Afghanistan-India ties, Spanta said Pakistan is using insurgency as a tool against Afghanistan and India.
“If peace comes at the price of re-influence of terrorism support in Afghanistan, the main losers will be the Afghan people, regional stability and the Indian government,” said Spanta.
Spanta said he believes the political scene in the country will become a Taliban-centric system.
"I think, whether we want it or not, a type of Talibanism in politics and society will happen," Spanta added.
The former head of the National Directorate of Security (NDS) Amrullah Saleh also said the National Unity Government had failed to build a national consensus around the peace process.
Saleh said President Ashraf Ghani has not paid enough attention to the peace process in the past year.
“We hope that Ashraf Ghani who is still the Afghan president will create a joint negotiations team with Afghanistan politicians, but currently such a pillar is missing,” said Saleh.
The Indian ambassador to Kabul Vinay Kumar meanwhile said his country is against insurgency and condemns violence.
The ambassador however pledged to continue supporting Afghanistan even if the Taliban ended up being included in government.
“We have consistently spoken against cross-border terrorism. Any violence is strongly condemned. And we as a country have a strategic partnership with Afghanistan,” said Kumar.
"Afghans treat India as a key strategic partner in its transformational decade," B. K. Sharma, head of Center for Strategic Studies of India said.
Reports indicate that India has over the past 16 years spent about $3 billion for the reconstruction of Afghanistan.
The former security officials also discussed future relations and security issues at the meeting.