Several civilians, mostly women and children, have lost their lives and sustained injuries when the US-led coalition purportedly fighting the Daesh Takfiri terrorist group carried out a number of aerial attacks in Syria's troubled eastern province of Dayr al-Zawr. 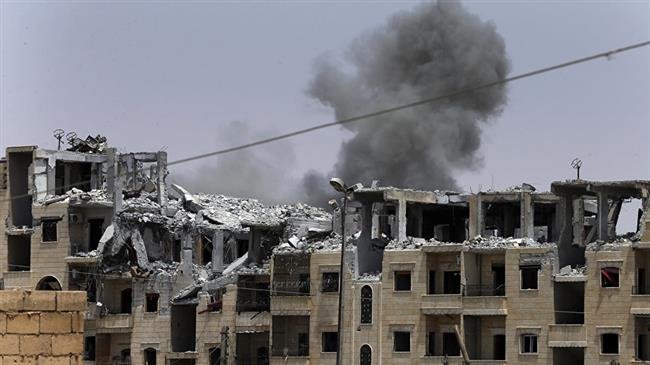 AVA- Local sources, speaking on condition of anonymity, told Syria’s official news agency SANA that the airstrikes targeted the village of Abu Hassan, which lies close to the town of Hajin, on Monday evening.
The sources added that a number of people are trapped under the rubble of buildings destroyed following the airstrikes.
The development came only a day after US-led coalition warplanes bombarded the town of al-Shaafah, which lies in the Abu Kamal district of Dayr al-Zawr province, on Sunday evening, leaving 14 people dead.
Informed sources, requesting not to be named, said the victims were all members of the same family.
On Saturday, twenty civilians, including women and children, were killed in US-led coalition airstrikes against Hajin.
Nine children and eight women were among the dead after the strikes targeted a local market.
Earlier in the day, SANA reported another coalition strike in the same province, where 11 civilians, including three women and five children, were killed.
On November 13, the Syrian Ministry of Foreign Affairs and Expatriates condemned a recent airstrike by the so-called US-led coalition against the eastern town of al-Shaafah, which left more than 60 people dead and injured, arguing that the massacre clearly pointed to the fact that members of the military alliance had no respect for moral values, international rules and regulations besides the lives of innocent civilians.
The ministry, in two separate letters, addressed to United Nations Secretary General Antonio Guterres and the rotating president of the UN Security Council Ma Zhaoxu, called on the Security Council to fulfill its responsibilities and stop US-led aerial assaults.
It also asked the world body to propose an international, independent and impartial mechanism to investigate the crimes being perpetrated by the so-called US-led coalition.

The ministry stressed that the so-called US-led coalition airstrikes were meant to kill as many Syrian people as possible, prolong the ongoing Syrian conflict, destroy the country’s infrastructure and undermine its sovereignty and territorial integrity in flagrant violation of all UN Security Council resolutions on Syria.
The letters concluded that the embarrassing silence of the Security Council had encouraged the coalition to kill more Syrian civilians and destroy their property.