Pakistan Foreign Ministry Shah Mehmood Qureshi has said that his country will cooperate with Afghanistan and US on the Afghan peace process. 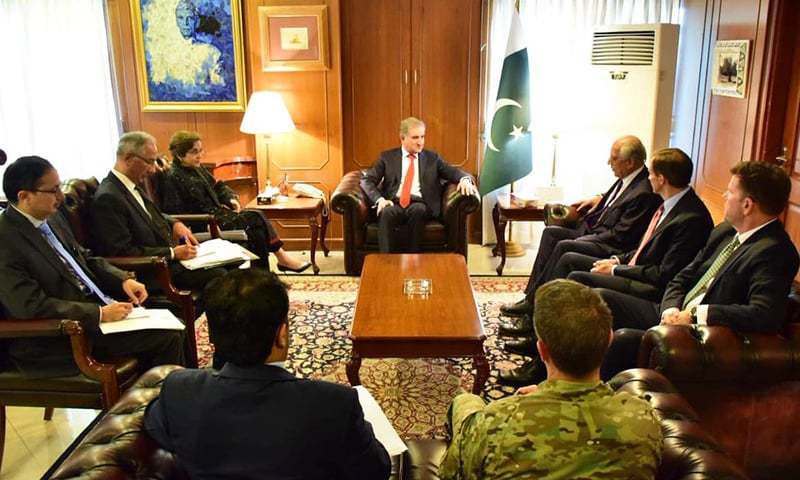 AVA- US Special Representative for Afghanistan Reconciliation Ambassador Zalmay Khalilzad in his multi-nation tour for Afghan peace visited Islamabad on Tuesday.
Khalilzad met with Pakistan Foreign Minister Shah Mehmood Qureshi and Foreign Secretary Tehmina Janjua and talked on the Afghan peace process and political settlement, Pakistan’s Foreign Ministry said.
Pakistan Foreign Ministry said that Khalilzad reiterated US President Donald Trump’s desire to seek Pakistan’s cooperation for peace and stability in Afghanistan.
In this meeting, Qureshi said his country will cooperate with US and Afghanistan on the Afghan peace process.
According to the US Department of State, in this trip, Ambassador Khalilzad will travel to Pakistan, Afghanistan, Russia, Uzbekistan, Turkmenistan, Belgium, the United Arab Emirates, and Qatar with an interagency delegation from December 2 to 20 to support and facilitate an inclusive peace process in Afghanistan, empowering the Afghan people to decide their nation’s fate.
A day before Khalilzad’s trip, the US Defense Secretary Jim Mattis said at a meeting with his Indian counterpart that the 40 years’ war in Afghanistan should come to an end.
“In Afghanistan, it’s gone on now it’s approaching 40 years; 40 years is enough and it’s time for everyone to get on board, support the United Nations, support Prime Minister Modi, support President Ghani and all those who are trying to maintain peace and make for a better world here. So, we are on that track,” Mattis said.
Mattis said they will leave no stone unturned to protect the Afghan people.
US’s efforts on the Afghan peace process has accelerated recently and the move has met with mixed reaction in the country. Even some high-ranking government officials have questioned that how the Taliban will join the peace process and how they will be integrated in the society.
“Taliban was a threat to the international community and has made ties with 20 terrorist groups. Has the threat been removed? Will the presence of terrorist groups which are a big threat against the regional and world countries, be prevented?” asked the Second Vice President Sarwar Danish, who addressed an event in Kabul on Tuesday.
Earlier, the Afghan High Peace Council (HPC) said that if Taliban wants amendment in the Constitution, the Afghan government is ready to include the amendments in the peace talks agenda.
The HPC spokesman Sayed Ehsan Taheri said they hope Khalilzad’s visit to Islamabad would help in the Afghanistan peace process emphasizing that they want peace talks to be held direct between the Afghan government and the Taliban.
“Our only hope from the regional and world countries and (Zalmay) Khalilzad’s visit is that any step and any support by any country will provide the ground for face-to-face talks between the Afghan Taliban and Afghan government in the near future,” said Taheri.
In reaction to HPC remarks on constitutional amendments, Chief Executive Abdullah Abdullah on Monday said the peace talks with Taliban should have no conditions and that amendments in the Constitution is only possible through the Constitutional Loya Jirga.
As Khalilzad has travelled to Pakistan, the Daily Telegraph has reported that Taliban leader Mullah Hibatullah Akhundzada has asked Taliban’s political team from Doha to come to Islamabad for talking on Afghan peace process.
The Daily Telegraph has quoted a Taliban official as saying that asking Taliban political team to Islamabad is very important and that visit can clear fates of many issues for the next round of talks between Taliban and US.