China has pledged to help Afghanistan and Pakistan put into effect a memorandum of understanding signed by the three sides on security cooperation aimed at curbing militancy and ending longstanding suspicions between Kabul and Islamabad over security issues. 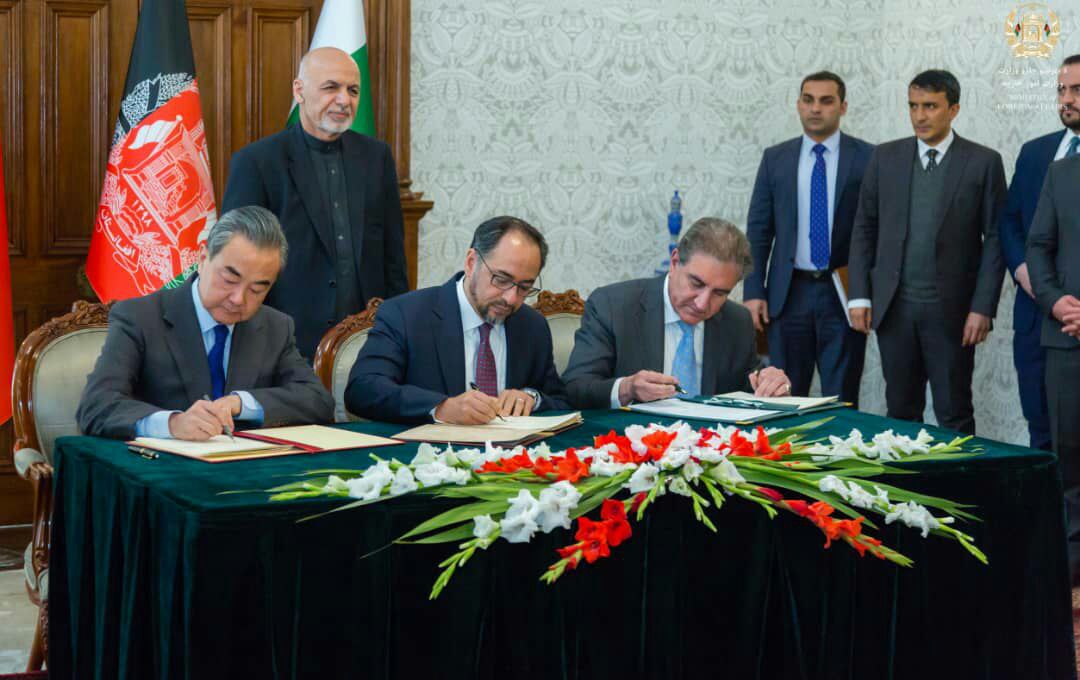 AVA- Foreign ministers of the three countries met in the Afghan capital, Kabul, in a trilateral meeting on Saturday.
Beijing used its influence on both countries to try to bring the two uneasy neighbors closer against the widespread militancy in Afghanistan.
The meeting was also the latest round of diplomacy aimed at opening talks with the Taliban militant group to end the Afghan war.
According to a joint statement released after the Second Afghanistan-China-Pakistan Foreign Ministers Dialogue, the three sides reaffirmed their commitment to further boosting their ties, deepening cooperation and advancing connectivity under the Belt and Road Initiative, Regional Economic Cooperation Conference on Afghanistan (RECCA) and other regional economic initiatives.
The statement also maintained that the three sides had strong resolve to fight terrorism in all its forms and manifestations, and without any distinction.
“China approves of this, and is willing to provide support and help for Pakistan and Afghanistan to improve their ties,” said the Chinese government’s top diplomat, State Councillor Wang Yi, in a joint press conference after the meeting.
The United States, along with a number of fellow-NATO members, invaded Afghanistan in 2001, toppling a Taliban regime in control of most of the country at the time, but it has failed to restore security in a country plagued by militancy and terrorism.
Over 8,000 people lost their lives or were wounded in Afghanistan between January and September this year, with the country on track to be deadlier than Syria in 2018. Kabul blames the Taliban for the bulk of the deaths.
Direct talks between Kabul and the Taliban collapsed in 2015, and the militant group, which is fighting to drive out international forces, has repeatedly rejected direct peace negotiations offered by the Western-backed Afghan government. However, however, Taliban has opened contacts with the Washington to prepare for possible talks to end the war in the country.
“We support Afghanistan and Pakistan efforts for peace and we call on the Taliban to join the peace process,” said Wang, adding that both Kabul and Islamabad have agreed to resolve disputes through “friendly consultations.”
The United States has long accused Pakistan of ignoring or even collaborating with groups which attack Afghanistan from safe havens along the border between the two countries. Islamabad strongly denies supporting militants of the Afghan Taliban.
In addition, Pakistan and Afghanistan also regularly accuse each other of sheltering militants. Both sides, however, deny such allegations.
Pakistan’s Foreign Minister Shah Mahmood Qureshi said his country was committed to stability and peace in neighbouring Afghanistan.
“By blaming, no one moves ahead, we have to stop pointing fingers at each other that why I am here to build mutual political trusts and facilitate the peace process of Afghanistan,” the minister said at the presser.
Addressing the press conference, Foreign Minister Salahuddin Rabbani said the meeting was focused on security and counterterrorism and that they emphasized security, ending violence, and implementation of Afghanistan-Pakistan action plan.
“We discussed regional peace and regional projects to connect the countries. The projects will improve economic development. We hope china will implement economic projects in Afghanistan,” Rabbani said at the press conference.
The first such meeting was held last year and the three foreign ministers are expected to meet again in Islamabad next year.