Pompeo in Mideast to corner Iran but Tehran not cowed

US Secretary of State Mike Pompeo has been touring the Middle East to rally support against Iran, but Tehran is not impressed. 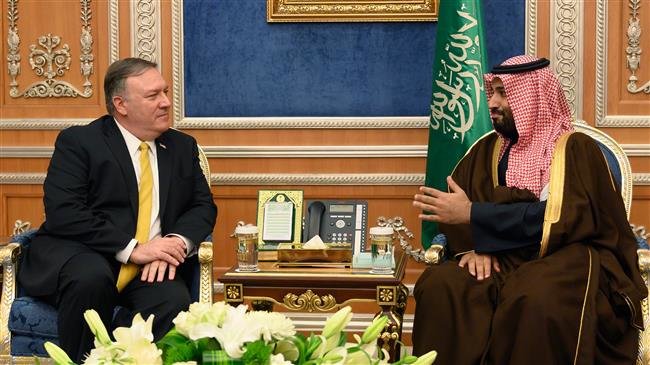 AVA- The top US diplomat set out on his much-anticipated trip last week, with a declared goal of forging a unified Arab front against Iran, a dream that has brought together even Saudi Arabia and Zionist regime.
Before landing in the Saudi Arabian capital of Riyadh on Monday morning, Pompeo made important stops in Jordan, Iraq, Egypt, Bahrain and the United Arab Emirates.
Perhaps the most important objective of the 9-country tour became clear during his rambling speech in Cairo, the Egyptian capital, where he spoke extensively of the US "campaign to stop Iran's malevolent influence and actions against this region and the world."
He said US economic sanctions against Iran were "the strongest in history, and will keep getting tougher until Iran starts behaving like a normal country."
But the hostile rhetoric didn’t end there as he once again repeated longtime US threats of military actions against Iran if all else failed.
In a wide-ranging interview with the CBS News on Sunday, the top US diplomat pointed to President Donald Trump’s decision to evacuate Syria from US military personnel.
Asked whether Washington would end up regretting the decision to exit one of the most important conflicts in the region, Pompeo took a rather boastful tone, bragging about how the US military could return to the region in no time.
“Margaret, the United States of America can project military power from lots of places in the world,” he told CBS anchor Margaret Brennan.
Pompeo further gloated over the ability of “our amazing armed forces” to accomplish US objectives anywhere in the world. “That certainly includes in Syria. It certainly includes into Iran if need be,” he said.
Pompeo’s remarks came at a time that all US military adventures in the region have turned into quagmires which have haunted several US administrations.
Years of US-led war and occupation in Iraq and Afghanistan have only strengthened militants and terrorist groups, requiring local governments to ask for help from Iran and other neighbors to help end the crises.
It has been the same story in Syria, where the US has been openly targeting Syrian military forces fighting foreign-backed militancy. And now, after Syria’s great victories with help from Iran and Russia, the US has decided to withdraw.
It is no secret that American officials cannot stand Iran’s regional influence.
On Sunday, The Wall Street Journal reported that John Bolton, Trump’s national security adviser, had even sought military plans from the Pentagon for a possible strike against Iran last year.