Afghanistan and Turkmenistan in a bid to expand mutual ties have signed a strategic cooperation agreement on political, economic and security spheres. the Presidential Palace said in a statement on Thursday. 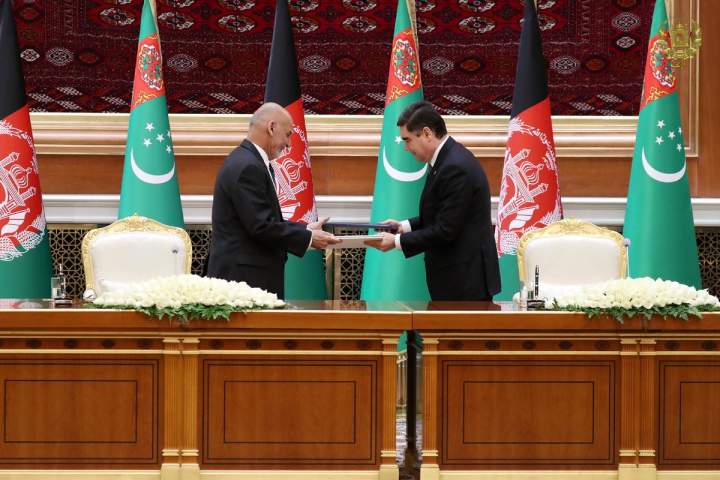 The agreement was signed between Afghan President Ashraf Ghani and his Turkmenistan counterpart Gurbanguly Berdimuhamedov on Thursday at a ceremony in  Ashgabat.
The officials of the two countries also signed Memorandum of Understandings (MoUs) and bilateral documents on various fields including agreements on customs cooperation and air traffic, on the location of international railway crossing at the common state border, on the oil and gas sector and on increasing the volume of Turkmen electricity supplied to the Afghan province of Herat.
A memorandum of understanding was also concluded for the construction of the Aqina-Andkhoi railway and the rules for organizing the railway communication between the Serhetabat-Turgundi stations at the joint state border were adopted.
In addition, the Memorandum of Understanding on cooperation between the Magtumguly Institute of Language, Literature and National Manuscripts of the Academy of Science of Turkmenistan and National Archive of Afghanistan was signed.
Peace Process
President of Turkmenistan said his country is supporting the efforts for peace and security of the region and that expanding regional cooperation in reaching for sustainable development.
Berdimuhamedov stressed that his country wants the issue of Afghanistan to be solved through peace talks and that Turkmenistan as a “impartial” country is ready for any kind of cooperation in this regard.
He also said that peace and security can pave the way for implementation of mutual plans between Kabul and Ashgabat, adding that his country has been able to launch great plans in energy, telecommunication and transport sectors with Afghanistan.
Berdimuhamedov, meanwhile, noted that with the implementation TAPI gas project, 12,000 job opportunities will be provided in Afghanistan and that the country would receive $1 billion annually from the project.
On his turn, President Ghani said that terrorism is a common threat to the region and world and that cooperation and coordination are better for the region than conflict, contention, and lack of cooperation.
He said Kabul and Ashgabat are united in security cooperation in the framework of internationally agreed standards and the UN Anti-Terrorism Strategy.
Tags:
Afghanistan, Turkmenistan Sign Strategic Cooperation Agreement
Source : Afghan Voice Agency(AVA)
Thursday 21 February 2019 17:56
Story Code: 180120 Copy text available
Afghanistan added again to EU money laundering blacklist
Afghanistan Protests Pakistan Invitation To Taliban
Afghanistan Among 10 Worst Conflict-Affected Countries to be a Child in
Afghanistan sees 150 land-mine casualties a month: UN
Afghanistan bans Iranian chicken imports
Featured news
Afghan forces convoy attacked in Kandahar
President Ghani Tasked Commission for Holding Inauguration ceremony
Afghan peace treaty signed in the presence of Pakistan: Shah Mehmood
Memorial monument for media martyrs in less than a month: Sharq
First-ever Afghan Freight Train Leaves Karachi for Kandahar
China Has Done Tremendous Job in Containing the Virus: Afghan Amb.
1
Prominent Taliban leader killed in Afghan forces operation in Badakhshan province
2
Air raids kill 4 IS militants in eastern Afghanistan
3
Afghans anxious as election results are disputed after US-Taliban deal
4
Afghan- Americans joint work on violence reduction
5
Afghan election results fuel tensions in the country
6
Zalmay Khalilzad, Josep Borrell discuss taliban deal with Ashraf Ghani
7
Afghan Government to form inclusive negotiating team for peace talks, Arg
8
Airstrikes, Special Forces raid kill 6 IS-K terrorists in Kunar: MoD
9
India Congratulates President Dr. Ashraf Ghani on his re-election as President of Afghanistan
10
Taliban declared the Afghan election results illegal in a statement