All roads connecting Bamyan, Daikundi and Ghor provinces with other parts of the country have been closed ny heavy snowfall and storms, officials said on Saturday. 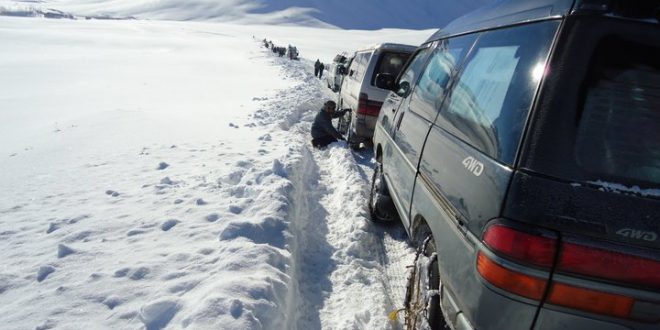 Ghulam Nabi Qanbari, director of public works for Bamyan province, told Pajhwok Afghan News they had never seen such storms in the winter. His department is unable to clear roads immediately.”
He said all 11 routes connecting Bamyan with neighbouring provinces had been blocked and the public works department had to clear them all for traffic.
The Kabul-Bamyan highway through Kotal-i-Shibar was not blocked in the winter before. However, he added, it was closed on Friday night following heavy snowstorms.
Ghor Public Works Director Abdul Majeed Samim said continued snowfalls blocked all highways in the province.
Asking passengers to avoid traveling the highways, Samim said the snowfall had been recorded at 30 to 50 centimetres in the province.
His counterpart for Daikundi, Khuda Dad Sirat, told Pajhwok the road-clearing process would not start until the snowfall had stopped.
Reza, a passenger travelling the Kotal-i-Qunaq highway, said around eight vehicles had been stuck there. Women and children inside cars needec assistance, hw added.
Yaqoob Shafaq, administrative chief for Sharistan, said five homes had been struck by avalanches in Falalij village. However, the avalanches caused no casualties.