Bernie Sanders, a prominent US senator, criticizing the United States long war in Afghanistan and said on Monday in a tweet that the Americans do not want endless war. 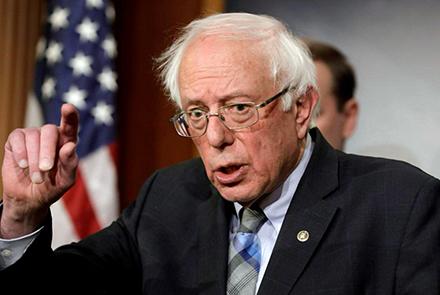 “American troops have been in Afghanistan for nearly 18 years, Iraq since 2003 and in Syria since 2015," he tweeted.
“The American people do not want endless war,” Sanders said. “Congress must reassert its Constitutional authority over the use of force and responsibly end these interventions.”
Senders remarks come at a time as the US Special Representative for Afghanistan Reconciliation Zalmay Khalilzad, who is leading the talks with the Taliban members for the fifth time in Qatar since his appointment last September, said on Feb. 28 that he had “productive” discussions with the group in Doha.
Taliban sources on Monday said the US and the Taliban negotiators have advanced towards reaching agreement on some key disputed issues.
The Afghan government, which has been out of these talks due to the persistent refusal by the Taliban, on Saturday called on Afghan politicians and people from different layers of the society to introduce their delegates for a national and inclusive negotiating team which will conduct peace talks on behalf of Afghans.
Presidential Palace said the final agreement on any topic relevant to peace will be determined by the Afghan government.
Tags:
Prominent US Senator Wants Afghanistan War End
Source : Tolo News
Tuesday 5 March 2019 11:37
Story Code: 180798 Copy text available
Featured news
325,000 Afghan refugees returned home over past four months: ministry
Turkey and Pakistan to ‘Enhance’ Bilateral Cooperation Against COVID-19
Afghanistan Reports 658 New COVID-19 Cases
Russia: 4 servicemen killed in helicopter hard landing
162 New COVID-19 Cases Reported in Herat and Balkh
US Welcomes Ghani's Pledge to Release Prisoners
1
Findings from Afghanistan war crimes investigation will cause 'distress' for some elite soldiers, judge warns
2
US and Iran attend Six Plus Two meeting on Afghanistan
3
‘Key' Taliban Member Arrested in Herat by NDS
4
Taliban Killed, Wounded 576 Afghan Civilians In 30 Provinces During Ramadan: ONSC
5
Airstrike kills 6 Taliban militants a day after similar raids killed 31 in Jawzjan
6
Peace Talks Ensure Afghanistan not a ‘Safe Harbour’ for Terrorists: US State Department
7
Around 2,000 Taliban prisoners to be released
8
Afghan leaders condole deaths in plane crash in Karachi city of Pakistan
9
US Secretary of State Urges Afghan Gov’t, Taliban to Refrain From Violence After Eid Ceasefire
10
Pentagon Report Suggests the US-Taliban Deal Was Inked in Afghan Blood