The Afghan government is expecting the ongoing peace talks between the U.S. and Taliban representatives in Qatar to pave way for the intra-Afghan dialogue, the Chief Executive Office said Tuesday. 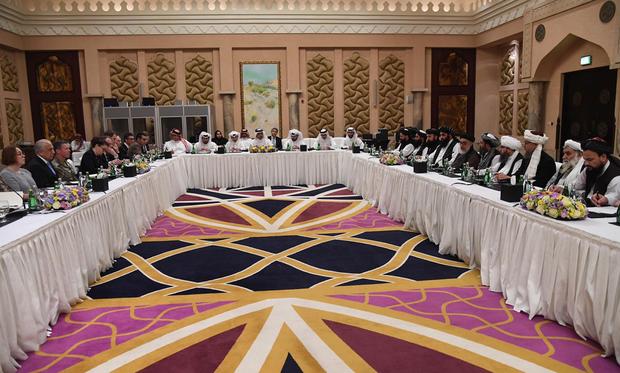 Mujib Rahman Rahimi, the CEO spokesman said that the “real” negotiations could take place when the Taliban sit in face-to-face talks with the Afghan government.
“We expect Qatar talks to pave the ground for intra-Afghan dialogue because it has been part of the ongoing negotiations,” Rahimi said.
Some Afghan politicians, meanwhile, said that the peace talks should not be held behind closed-doors and that the Afghan government should be informed of any developments being made in the going U.S.-Taliban talks in Qatar which entered its 16th day.
Nayeem Lalai Hamidzai, a former parliament member said that it is “important” to brief the Afghan government on progress being reached in peace talks so that the people could be informed of the process.
“The people of Afghanistan deserve peace. The government is being sidelined [in the peace negotiations] and it is a great shame that outsiders are taking decisions on our fate,” said Ahmad Sayeedi, a former Afghan diplomat and political analyst based in Kabul.
It comes as many Afghans are concerned of abrupt U.S. pullout from Afghanistan, following the peace talks. They believe the issue might deepen the crisis in the war-torn country.
Tags:
Kabul Expects Ongoing Qatar Talks to Make Way for Intra-Afghan Dialogue
Source : Afghan Voice Agency(AVA)
Tuesday 12 March 2019 18:52
Story Code: 181347 Copy text available
No agreement so far in Qatar peace talks: Afghan Taliban
Envisioning Afghanistan After A Peace Deal
President encourages Taliban to join intra-Afghan dialogue
US Afghan envoy to kick off intensive trip of 6 countries
Taliban to talk with Afghan Political Parties
Featured news
UAE firm to invest in 3,000 MW solar power project in Afghanistan
Women and children among 10 killed, wounded in Kandahar roadside bomb explosion
Afghanistan, US, Uzbekistan Discuss Trilateral Cooperation
Russia receives orders from 20 countries for ONE BILLION doses of world’s first Covid-19 vaccine
Pompeo Says He Warned Russia Against Offering Bounties for US Soldiers
21 Civilians Killed in 10 Days in Arghistan District of Kandahar: AIHRC
1
Loya Jirga decides that 400 hard-core Taliban prisoners should be released
2
9 members of a single family wounded in Taliban mortar attack in East of Afghanistan
3
US to cut troop levels in Afghanistan
4
Terrorists trained by Pakistani commandos in Afghanistan planning attacks in Kashmir: Report
5
Nabil: Pakistan Is Never Trustworthy
6
U.S. plans to withdraw more than 4,000 troops from Afghanistan by end of November
7
Intra-Afghan Talks to Begin on August 16 in Doha: State TV
8
Pakistan steadfast for inclusive Afghan settlement: FM
9
Taliban expresses readiness to hold peace talks with Afghan govt
10
Khalilzad Expects Prisoners' Release in 'Next Few Days'