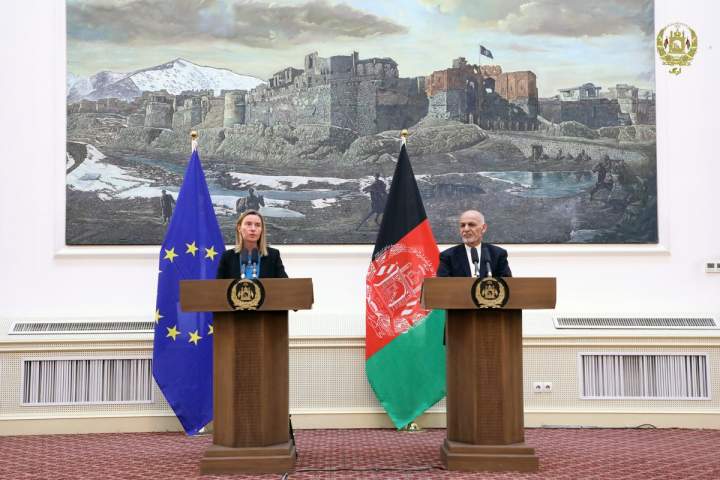 The EU foreign policy chief on Tuesday expressed full support for an Afghan-owned peace process during her visit to capital Kabul.
Federica Mogherini met Afghan President Mohammad Ashraf Ghani at the Arg (presidential palace).
Addressing a joint news conference with Ghani, Mogherini announced the EU is ready to serve as guarantor of the peace deal in the war-ravaged country. She stressed the Constitutional framework must be upheld to achieve sustainable peace.
“First and foremost the process belongs to the Afghan people and the Afghan institutions and there is no step backwards when it comes to democracy, the constitutional setup and especially human rights, rule of law and all the achievements that have been gained especially for the Afghan women, for the children and minorities in the country,” she said.
Ghani, for his part, said Afghanistan is situated in the heart of Asia, and instability in Afghanistan would have impacts on the whole region.
“Stability cannot be brought with intimidation or with force and guns that would only start a new era of instability,” he warned.
This comes as the Taliban and the U.S. are set to resume talks next month in Doha, Qatar. The Afghan government is increasingly feeling to be sidelined in this negotiation table. The Taliban are not willing to talk with the Afghan government, resulting in a stalemate.
Calling for immediate ceasefire and resumption of peace talks in the war-ravaged country, Mogherini said EU would always remain on the side of the Afghans.
Tags:
EU throws weight behind Afghan-owned peace process
Source : Afghan Voice Agency(AVA)
Tuesday 26 March 2019 15:52
Story Code: 182102 Copy text available
China supports Afghan-owned peace process
India emphasizes on an Afghan-led and Afghan-owned peace process
Security Council welcomes outcome of Geneva conference on Afghanistan
Featured news
Leader: Iran's appeal as model of resistance angers US
Galaxy Z Flip Camera Specs Revealed-Disappointing
Death toll from China’s mystery virus rises to 6
Lebanon in urgent need of new government to avoid crisis: Hariri
Iran warns of leaving NPT if nuclear case goes to UN
Iran Has Proven Its Power to Counter Any Threats, Defense Minister Says
1
Afghan government demands complete ceasefire with Taliban
2
More than 20 Taliban militants killed – Herat
3
US, Europe, UNAMA Representatives Met in Dubai, Discussed Peace in Afghanistan
4
India, Iran Should Work to Expedite Chabahar Port Connectivity to Afghanistan: Zarif
5
UN Envoy Spotlights Impacts of Violence, Threats Against Reporters in Afghanistan
6
US military says 11 US troops wounded in Iranian missile attack despite earlier denials
7
German-Afghan Army Adviser on Trial for Spying for Iran
8
France deploys radar system, aircraft carrier in Saudi Arabia
9
Iraqi forces arrest obese Daesh mufti in Mosul
10
US may sign Taliban deal with violence reduction, but it wouldn't help Afghans: VP Danish