U.S. Special Envoy for Afghanistan Reconciliation Zalmay Khalilzad in a renewed effort to restore peace in the war-weary country has embarked on another multi-nation trip to seven countries, the U.S. Department of State says in a statement. 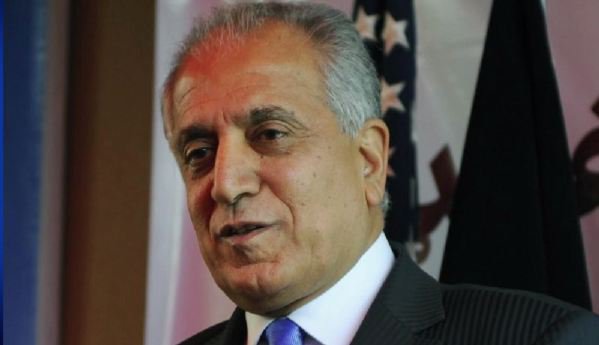 According to the statement, Khalil has begun his trip on Afghan peace to Afghanistan, the United Kingdom, Belgium, Pakistan, Uzbekistan, Jordan and Qatar from March 25 to April 10, as part of the overall effort to facilitate a peace process that brings all Afghan parties together in inclusive intra-Afghan negotiations.
“In Kabul, the Special Representative will consult with the Afghan government and other Afghans about the status of U.S. talks with the Taliban, encourage efforts to form an inclusive negotiating team, and discuss next steps in intra-Afghan discussions and negotiations,” the statement adds.
The statement says that Khalilzad will meet with the Allies and partners regarding the status of peace talks and to coordinate sustained commitment by the international community to peace and development in Afghanistan.
Meanwhile, the U.S Ambassador to Afghanistan John Bass in a special interview with Ariana News said that there is some “fundamental” difference of perspective between Taliban views its role in society and how the rest of the society views the Taliban’s role, behavior and actions in Afghanistan.
“There is a fundamental difference between the United States and all of our allies, recognition of the current government in Kabul as the legitimate representative of the Afghan people to other countries and in the United Nations and of course how the Taliban views the current government, “ Bass said.  “So that is the difference that needs to work it out in the course of discussions.”
The envoy also talked about another key challenge in the Afghan peace process which according to him is the Taliban’s relationship with the countries in the region.
“Another key challenge, a degree of ambiguity about the Taliban’s relationships with some other governments and the extent to which the Taliban would implement an agreement faithfully with respect to its relationships which currently clearly exists with some other government in the region,” Bass said.
Ambassador Bass, meanwhile, said that achieving a degree of certainty about that dimension of the conflict will be quite important for the Afghan people “to have confidence in the outcome and confidence that any agreement would actually be important”.
Tags:
Khalilzad Embarks On Seven-Country Trip On Afghan Peace
Source : Afghan Voice Agency(AVA)
Wednesday 27 March 2019 09:41
Story Code: 182125 Copy text available
Featured news
Pompeo Discusses Afghanistan With Russia, Floats Summit For UN Anniversary
U.S. soldier dies of non-combat related incident in South of Afghanistan
We are committed to assisting Afghan forces as long as needed: NATO SCR
Khalilzad reacts to Taliban car bomb attack in Samangan province
Taliban attacks kill 19 Afghan forces in Kunduz, Badakhshan provinces
COVID-19: MoPH Reported 28 New Deaths In the Past 24 Hours
1
Strong and positive signal needed in Afghanistan's anti-corruption efforts: donors
2
Taliban: ‘Anti-Peace’ Circles Drawing Links To Uzbek Jihadist Group
3
Kabul To Host Third International Meeting On Peace
4
Dispute Over 592 Taliban Prisoners Solved: Source
5
12 Taliban militants killed in Daikundi
6
Bounty Claims ‘Downright Lie’ Said Russian Ambassador To US
7
UNAMA announces stance on announcement of final results of Afghan presidential elections
8
Abdullah will soon finalize list of ministerial nominees: spokesman
9
The Senseless Violence in Afghanistan Must Stop
10
Regional, International Partners Unhappy With High Level Of Taliban Violence: Foreign Ministry