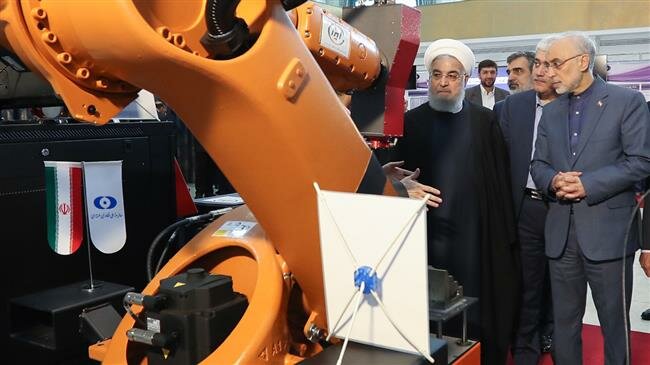 AVA- The achievements, which were unveiled during the ceremony in Tehran on Tuesday, were designed and manufactured by experts of the Atomic Energy Organization of Iran (AEOI), Ali Akbar Salehi, who heads the body, said.
Among the equipment was a continuous-flow zonal centrifuge as well as Yttrium-90, a medically-significant product that can be used in radiation therapy to treat cancer.
The achievements also included a control system for monitoring nuclear processes, a quantum-entangled photon source, oxygen-18 which is a stable isotope used in radiopharmaceuticals industry, and a FTIR (Fourier-transform infrared spectroscopy) spectrograph practical in medical and food industries.
During the ceremony, which was also attended by a number of ministers, officials and commanders, 114 nuclear achievements that had come to fruition last year were put on display.
The achievements cover various fields, including exploration, extraction, fuel cycle, power plants, science and technology as well as laser.
Addressing the ceremony, President Rouhani lashed out at the US for re-imposing economic sanctions on the Iranian nation after leaving the 2015 multilateral nuclear deal last May, saying such measures have failed to hinder Iran’s progress in the nuclear industry.
“What have you achieved with your sanctions,” Rouhani told the Americans. “If you are claiming that you can stop Iran’s [gains] in advanced technologies by imposing sanctions, you already know that you are lying.”
The Iranian chief executive said that the US “has failed and will fail to stop the progress of the Iranian nation and scientists.”
“If you were scared of our IR1 centrifuges yesterday, you should know that today we launched a chain of 20 IR6 centrifuges and if you keep up the oppression, we will unveil a chain of IR8 centrifuges in the near future,” Rouhani said.
President Rouhani further warned that Tehran was running out of patience over the unfulfillment of the European Union’s economic pledges meant to compensate for Washington’s absence in the Iran deal, calling on the European signatories to live up to their end of the bargain.
The AEOI head also addressed the event, saying the organization under his watch has designed and produced advanced centrifuges with the aim of assisting the country’s health and medical sector.
He said the new achievements were all in accordance with the International Atomic Energy Organization (IAEA)’s guidelines.
Salehi further said that Tehran welcomes the IAEA’s impartial stance on its nuclear program, adding the IAEA’s 14 reports on the country’s nuclear activities prove the Islamic Republic regards itself as duty-bound to cooperate with the UN nuclear watchdog under the deal.
Iran’s nuclear chief further said that “the return of the US unilateral sanctions will fail to dent our firm resolve to advance the main objectives of the [country’s] nuclear industry.”