The voter registration process for the upcoming presidential elections was kicked off on Saturday in which the Independent Election Commission (IEC) will not use the biometric identification system. 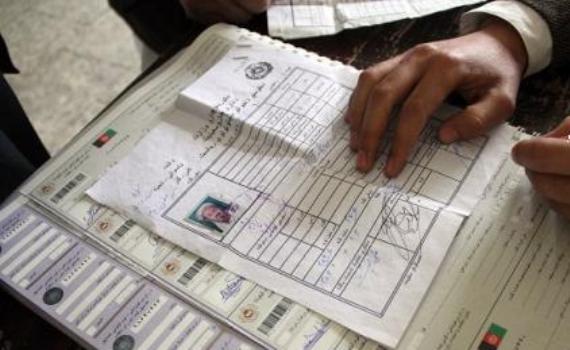 The election commission’s chairperson Hawa Alam Nuristani said those who are 18 years old or will reach 18 years of age until September can register their names to vote in the presidential elections which are scheduled for September 28.
She said the 9.5 million voters who registered last year in April can also use their vote in the upcoming polls.
“This process has started in all 34 provinces,” Nuristani said. “
The Afghan government and the international community have allocated $23 million for awareness on presidential elections but the election commission officials said the money will be invested in media ads.
The IEC’s decision on removing the use of biometric system in voter registration was faced with criticism by members of electoral monitoring organizations who said that the decision will affect the transparency of the upcoming polls.
Some electoral observers said the Independent Election Commission lacks a clear strategy to ensure the transparency of the presidential elections.
According to the election commission, the voter registration will be conducted from the beginning only in central Ghazni province and those who have registered last year will have to go through the process once again.
Tags:
Voter Registration Begins Countrywide: Nuristani
Source : Afghan Voice Agency(AVA)
Saturday 8 June 2019 15:53
Story Code: 186357 Copy text available
Featured news
Afghanistan Reports 658 New COVID-19 Cases
Turkey and Pakistan to ‘Enhance’ Bilateral Cooperation Against COVID-19
Russia: 4 servicemen killed in helicopter hard landing
162 New COVID-19 Cases Reported in Herat and Balkh
US Welcomes Ghani's Pledge to Release Prisoners
34 Afghans Among Asylum Seekers Rescued by Turkish Coast Guard
1
Findings from Afghanistan war crimes investigation will cause 'distress' for some elite soldiers, judge warns
2
US and Iran attend Six Plus Two meeting on Afghanistan
3
‘Key' Taliban Member Arrested in Herat by NDS
4
Taliban Killed, Wounded 576 Afghan Civilians In 30 Provinces During Ramadan: ONSC
5
Airstrike kills 6 Taliban militants a day after similar raids killed 31 in Jawzjan
6
Peace Talks Ensure Afghanistan not a ‘Safe Harbour’ for Terrorists: US State Department
7
Around 2,000 Taliban prisoners to be released
8
Afghan leaders condole deaths in plane crash in Karachi city of Pakistan
9
US Secretary of State Urges Afghan Gov’t, Taliban to Refrain From Violence After Eid Ceasefire
10
Afghans Want Ceasefire to Continue Beyond Eid