Afghanistan was defeated by New Zealand by 7 wickets on Saturday night’s match in the World Cup. 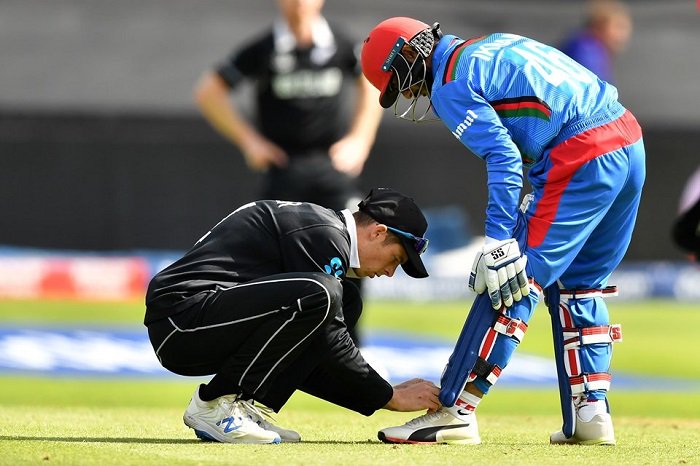 New Zealand made it three wins from three as Jimmy Neesham and Lockie Ferguson found a form with the ball in a seven-wicket win against Afghanistan.
New Zealand’s Neesham (5-31) and Ferguson (4-37) ran through the top and middle order as Afghanistan were bowled out for 172.
Despite losing Martin Guptill first ball and Colin Munro cheaply, New Zealand coasted to their target with 17.5 overs to spare.
Captain Kane Williamson led the way with an unbeaten 79 from 99 balls.
Despite top of the order from Hazratullah Zazai (34) and Noor Ali Zadran (31) and a gutsy 59 from Hashmatullah Shahidi.
Seamer Aftab Alam also showed his potential, taking all three of New Zealand's wickets to fall.
But they were hampered by the loss of leg-spinner Rashid Khan midway through the game with a head injury, caused when he was hit on the helmet and bowled for nought after ducking into a short ball from Ferguson.
However, Afghanistan suffered their third defeat in three matches after Saturday night’s match.
Afghanistan will face South Africa in their next match which will kick-off on Saturday.
Tags:
Afghanistan Lost To New Zealand Another World Cup Match
Source : Afghan Voice Agency(AVA)
Sunday 9 June 2019 10:08
Story Code: 186395 Copy text available
Featured news
Afghanistan Reports 658 New COVID-19 Cases
Turkey and Pakistan to ‘Enhance’ Bilateral Cooperation Against COVID-19
Russia: 4 servicemen killed in helicopter hard landing
162 New COVID-19 Cases Reported in Herat and Balkh
US Welcomes Ghani's Pledge to Release Prisoners
34 Afghans Among Asylum Seekers Rescued by Turkish Coast Guard
1
Coronavirus: Serie A season's fate to be decided May 28 as group training is approved