Afghanistan, US Have Coordination On Peace: Ghani

President Ashraf Ghani, who met with US Special Envoy Zalmay Khalilzad and a number of Afghan politicians and religious scholars in his office on Wednesday, said there is a coordination between Afghanistan and the United States on the ongoing peace process -- which critics say has not made a tangible process since it first started last year in September. 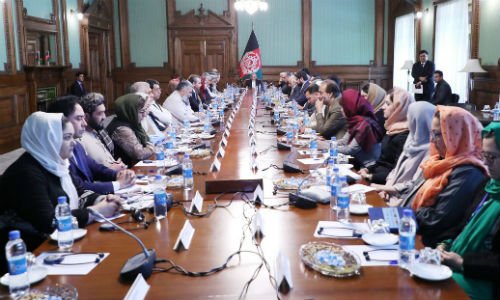 Ghani said there is a “regular and continuous information sharing process between the two countries” on the ongoing peace efforts, the Presidential Palace said in a statement.
He added that there is a positive environment at the international level on Afghan peace and that the Afghan government, the United States and the European Union are working together for peace. He said Germany plays a facilitator role in the process.

Ghani mentioned that the Afghan government has undertaken a number of practical steps aimed at creating regional consensus around peace.
“The international community has reached a consensus to think about Afghanistan in the long term, not in a short or medium term,” he said.
He said that the recent grand council, also called the Grand Consultative Jirga for peace, defined a roadmap for the Afghan government and that the demands of the council will be implemented “step by step”.

Ghani reiterated that the presidential elections will be held “at any cost”.

Meanwhile, Khalilzad commended the Afghan government’s initiatives for peace.
He said that an international consensus has been created for Afghan peace and that there is a need for a similar consensus at the regional level.
The US envoy said that the peace process requires harmony and coordination.
Khalilzad reiterated that discussions have been held with regional countries and they have been assured that their role will be considered in the Afghan peace process.
Tags:
Afghanistan, US Have Coordination On Peace: Ghani
Source : Afghan Voice Agency(AVA)
Wednesday 12 June 2019 17:05
Story Code: 186615 Copy text available
Afghanistan's Shahzad says he will quit cricket if 'that's what they want'
Pakistan, Afghanistan agree to make joint efforts for peace in region
New Zealand to cut troops to 11 in Afghanistan: PM
Afghanistan, Pakistan Officials To Hold Talks Today
Afghanistan Lost To New Zealand Another World Cup Match
Featured news
Pullout of 8,000 Troops by November Not Only Option: Esper
Iran to Reopen Border with Turkmenistan on June 1
COVID-19: Over 350,000 Kabul Residents Exempt From Paying Water and Power Bills
Ten killed in highway crash in Faryab
COVID-19 in Bamiyan: Saighan District Fully Quarantined; Face Masks Mandatory in Cities
Afghan Futsal goalkeeper tests positive for Coronavirus
1
Findings from Afghanistan war crimes investigation will cause 'distress' for some elite soldiers, judge warns
2
Peace Talks Ensure Afghanistan not a ‘Safe Harbour’ for Terrorists: US State Department
3
Pentagon Report Suggests the US-Taliban Deal Was Inked in Afghan Blood
4
Around 2,000 Taliban prisoners to be released
5
US Secretary of State Urges Afghan Gov’t, Taliban to Refrain From Violence After Eid Ceasefire
6
How the Taliban Outlasted a Superpower: Tenacity and Carnage
7
COVID-19: More than 12,000 Cases in Afghanistan
8
Afghan government to release 900 Taliban prisoners today
9
Trumps Considering Full Troop Pullout from Afghanistan
10
Afghan security institutions reject report half of forces have coronavirus