Pompeo blames Iran for tanker attacks in Sea of Oman

The administration of US President Donald Trump blames Iran for attacks on two oil tankers in the Sea of Oman without providing evidence as Iranian Foreign Minister Mohammad Javad Zarif has called the incident "suspicious" which occurred during a landmark visit by Japanese Prime Minister Shinzo Abe to the Islamic Republic. 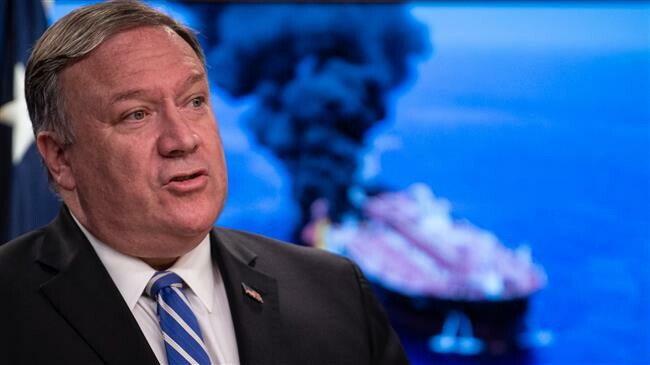 AVA- On Thursday morning, Iranian rescuers rushed to the assistance of two oil tankers hit by yet unspecified accidents in the Sea of Oman, transferring all of their 44 crew members to Iran's southern shores.
None of the two involved tankers -- one sailing under a Panama flag and owned by Japan and another bearing the Marshall Islands’ ensign -- sank during the incident, said the director general of Ports and Maritime Department in the southern Iranian province of Hormozgan, Allah-Morad Afifipour.
US Secretary of State Mike Pompeo on Thursday accused Iran of carrying out the attacks without providing any evidence to back up his accusation.
“It is the assessment of the United States government that the Islamic Republic of Iran is responsible for the attacks that occurred in the Gulf of Oman today,” Pompeo told reporters in a brief appearance at the State Department in Washington, DC.
“This assessment is based on intelligence, the weapons used, the level of expertise needed to execute the operation, recent similar Iranian attacks on shipping, and the fact that no proxy group operating in the area has the resources and proficiency to act with such a high degree of sophistication,” Pompeo said.
Saudi agrees with US
Saudi Arabia – a key ally of the US in the Middle East – said on Thursday that it agrees with the United States that Iran was behind the attacks.
"We have no reason to disagree with the secretary of state. We agree with him," Saudi Minister of State for Foreign Affairs Adel al-Jubeir told CNN. "Iran has a history of doing this."
Britain agrees with US, warns Iran
Britain has also agreed with the US and said that Iran is responsible for the attacks, and warned Tehran that these actions were "deeply unwise.”
"This is deeply worrying and comes at a time of already huge tension. I have been in contact with Pompeo and, while we will be making our own assessment soberly and carefully, our starting point is obviously to believe our US allies," British Foreign Secretary Jeremy Hunt said in a statement on Thursday.
"We are taking this extremely seriously and my message to Iran is that if they have been involved it is a deeply unwise escalation which poses a real danger to the prospects of peace and stability in the region," he added.
The Trump administration had also accused Iran of being behind a similar attack on May 12 on four oil tankers in the Persian Gulf while independent analysts blamed US and Israeli intelligence agencies for carrying out a false flag operation in order to ignite a conflict in the Middle East region.
Last week, the United Nations Security Council held a meeting on the vessel attacks near the UAE port of Fujairah, but member states refused to blame any party despite Abu Dhabi's claim that a "state actor" was behind the incident. Russian Deputy Ambassador Vladimir Safronkov told reporters that no evidence on Iran's alleged link to the attacks were presented during the briefing.
Days before the Security Council briefing, hawkish US National Security Adviser John Bolton had vowed to present to the UN evidence on Iran's involvement in the Fujairah attacks, but he didn't.
Earlier on Thursday, hours after the attacks occurred, Zarif, said, “Suspicious doesn't begin to describe what likely transpired this morning.”
Highlighting the fact that attacked tankers were bound for Japan, Zarif noted, “Reported attacks on Japan-related tankers occurred while PM @AbeShinzo was meeting with Ayatollah @khamenei_ir for extensive and friendly talks.”
Iran's foreign minister then stressed that promotion of a regional dialogue forum was necessary to deal with the recent attacks on commercial ships in the Persian Gulf, in what was a clear allusion to his previous call for the formation of a such a forum for the Persian Gulf littoral states in an attempt to restore peace and stability to the region.
Qatar calls for international probe
Meanwhile, Qatar has called for an international investigation into the attacks on tankers.
The Qatari foreign ministry in a statement on Thursday denounced acts of destruction "regardless of who is behind them" and warned against damaging the security of the Persian Gulf region, and called on all sides to show restraint and stop escalations.