President Trump approved military strikes against Iran before dawn Friday but pulled back from launching them on Thursday night, the New York Times reports. 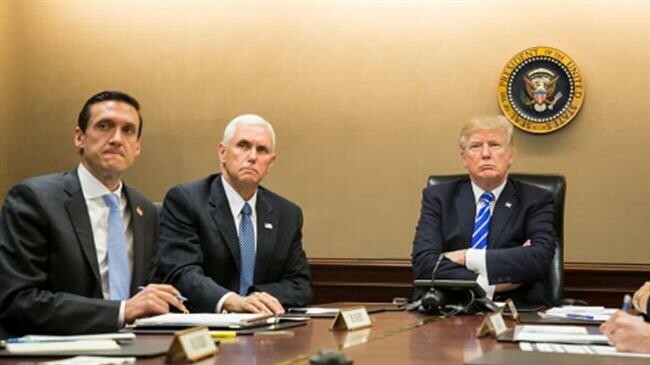 AVA- The paper cited military and diplomatic officials as saying that the US president had initially approved attacks on a handful of Iranian targets, like radar and missile batteries.
"The operation was underway in its early stages when it was called off," the Times said, citing what it called a senior administration official.
"Planes were in the air and ships were in position, but no missiles had been fired when word came to stand down," the official said.
The source said that US forces were woken up around 2 am local time "within the hour" of striking, then nothing happened. Plans to attack were said to have still been on by 6:30, even 7 pm EDT.
A Pentagon official told Newsweek that among the US' designated targets was the S-125 Neva/Pechora surface-to-air missile system and a Soviet system known to the NATO Western military alliance as SA-3 Goa.
The US military claims this weapon was used by the IRGC to down the Navy RQ-4A Global Hawk drone. However, Iran has officially stated that it used the domestically produced 3rd Khordad transporter erector launcher and radar, a variant of the locally-made Raad surface-to-air missile system.
Trump initially issued a series of cataclysmic threats, insisting that the RQ-4 Global Hawk was flying over international waters when it was taken down by an Iranian missile.
However, the GPS coordinates released by Iran put the drone eight miles off the country’s coast, inside the 12 nautical miles from the shore, which is Iran's territorial waters.
Trump's decision to call of the strike came after intense discussions and debate at the White House among the president’s top national security officials and congressional leaders in the Situation Room, the paper said.
According to The New York Times, Trump’s national security advisers split about "whether to respond militarily" after Iran shot down a US surveillance drone for intruding into its airspace.
Senior administration officials said Secretary of State Mike Pompeo, hawkish national security adviser John Bolton and CIA director Gina Haspel had favored a military raid.
"But top Pentagon officials cautioned that such an action could result in a spiraling escalation with risks for American forces in the region," the New York Times said.
According to the Times, congressional leaders emerged from the president’s classified briefing and urged Trump to de-escalate the situation. They called on the president to seek congressional authorization before taking any military action.
“This is a dangerous situation,” Speaker Nancy Pelosi reportedly said.
After firing off a volley of belligerent rhetoric, Trump has seemed to be looking for a way to avoid a potentially serious military crisis. Instead of directly accusing the leaders of Iran, Trump said it was an individual in Iran who was responsible for shooting down the drone.
“This is a new fly in the ointment,” Trump told reporters in the Oval Office of the White House on Thursday while meeting with Canadian Prime Minister Justin Trudeau there.
"I think probably Iran made a mistake - I would imagine it was a general or somebody that made a mistake in shooting that drone down," Trump said.
The news of the downing, however, was first announced by Iran which took responsibility for the strike and asserted that the high-altitude American drone was operating over Iranian air space.
In an apparent effort to find a way out of the dilemma, the US president downplayed the incident by emphasizing the aircraft had been unmanned. He claimed that if the drone had had a pilot "it would have made a big difference" to him.
"We had nobody in the drone. It would have made a big difference, let me tell you, it would have made a big, big difference" if the aircraft had been piloted, Trump said.
Meanwhile, sources tell Newsweek that numerous regional US military assets, including the Ticonderoga-class guided-missile cruiser USS Leyte Gulf, have been put on 72-hour standby.
The US Federal Aviation Administration also issued an emergency order prohibiting US operators from flying in an overwater area of Tehran-controlled airspace over the Strait of Hormuz and Gulf of Oman due to heightened tensions.
Trump is behind all the current escalation. Last year, Trump pulled the United States out of the 2015 nuclear pact with Iran, over the objections of China, Russia and American allies in Europe.
He has also imposed economic sanctions on Iran, trying to cut off its already limited access to international trade, including oil sales.
Earlier this month, the US government ratcheted up the stakes by sending an aircraft carrier strike group and B-52 bombers and at least 1,500 troops to the Middle East in a message to Iran.
Iranian officials have said the country is not after a war, but is ready for one.
Iran’s ability to target and destroy the high-altitude American drone, which was developed to evade the very surface-to-air missiles used to bring it down, surprised Pentagon officials.
They "interpreted it as a show of how difficult Tehran can make things for the United States as it deploys more troops and steps up surveillance in the region," the New York Times wrote.