President runner Mohammad Haneef Atmar has said the incumbent government is a major threat to upcoming presidential elections and national unity of the country. 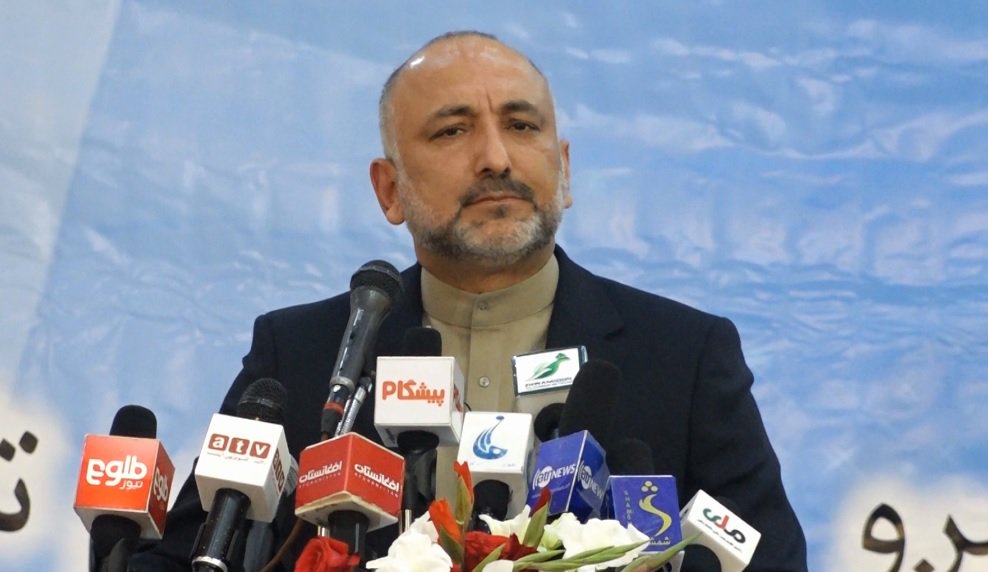 Atmar made the remarks during a gathering of protesting presidential runners and their supporters in Kabul earlier today.
Calling the incumbent government as illegitimate, Atmar said the government has violated the constitution of Afghanistan and is busy hatching plans to spark divisions among the people.
Atmar further added that the incumbent government has opposed all steps and efforts regarding peace and reconciliation process.
Meanwhile, Atmar claimed that the incumbent government is attempting to spark divisions among people in a bid to extend its reign over power.
Atmar also added that the incumbent government wants the election to be conducted under its administration.
Furthermore, Atmar accused the government of attempting to steal the votes of the people similar as it did during parliamentary elections.
In other parts of his speech, Atmar said the incumbent government is preparing for a widespread and massive fraud during the presidential elections.
Atmar said they want an interim government and president as per the constitution of Afghanistan in a bid to pave the way for a transparent election.
Tags:
Incumbent government a major threat to elections, national unity: Atmar
Source : Afghan Voice Agency(AVA)
Tuesday 25 June 2019 11:58
Story Code: 187312 Copy text available
Election rival says Afghan President Ghani hindering peace deal
Afghan President Sacks Deputy Chief Executive
Afghan Politicians To Meet in Pakistan for Peace Talks
Period between end of government term and election should be discussed: Atmar
EU Planning To Increase Cooperation With ANDSF
Featured news
Rahmani Praises Top 3 Passers of National University Entrance Exam
Ghani: Customs Recruitments should be Independent
EU Envoys Stress On Urgent Need For Comprehensive Ceasefire In Afghanistan
Daudzai: Pakistan Showing They Are Serious About Support For The Peace Process
Afghanistan thanks Pakistan for facilitating Afghan peace process
COVID-19: 6 New Cases Reported From 224 Samples Tested
1
Afghan, Pak Officials Discuss Abdullah’s Upcoming Pakistan Trip
2
Political Deputy spoke at the Ministerial Meeting of Foreign Ministers of Landlocked Developing Countries on the sidelines of #UNGA