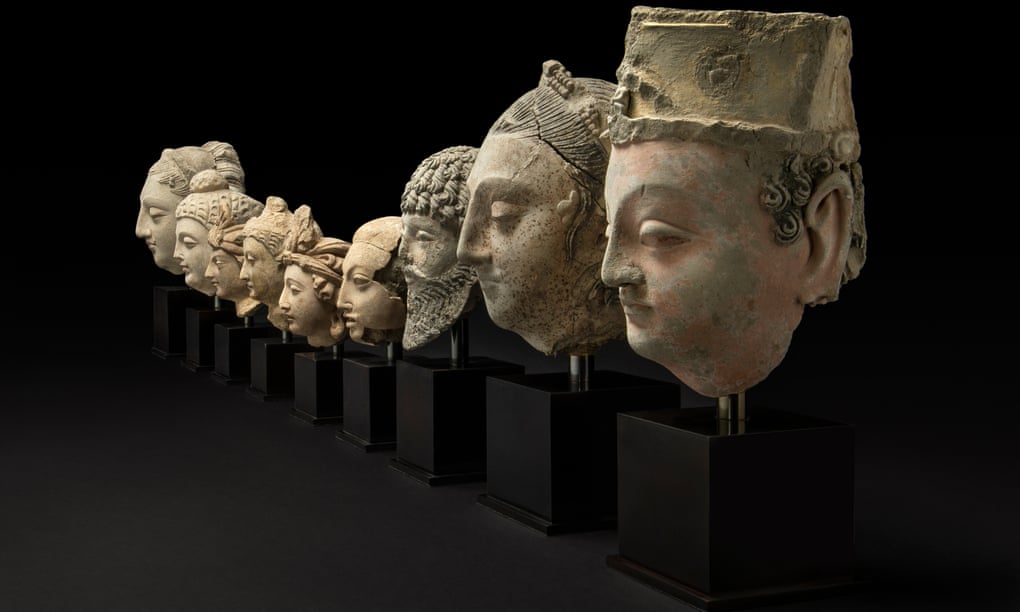 Fourth-century Buddhist terracotta heads probably hacked off by the Taliban and found stuffed in poorly made wooden crates at Heathrow are to be returned to Afghanistan where they will be star museum exhibits.
The British Museum gave details on Monday of one of the most significant repatriation cases it has dealt with relating to the illegal looting of artefacts from Afghanistan and Iraq.
Nine sculptural heads and a torso were intercepted at Heathrow in 2002 after a flight from Peshawar in Pakistan. After a long legal process, they were sent to the British Museum last year to be analysed, conserved and catalogued.
St John Simpson, a senior curator at the museum, said the heads would have been painted and had bodies and would have adorned the walls of Buddhist monasteries in the ancient kingdom of Gandhāra about 1,500 years ago.
“They are stunning,” he said. “These are quite outstanding. We’ve returned thousands of objects to Kabul over the years but this is the first time we’ve been able to work on Buddhist pieces.”
Simpson said the Gandhāran sculptures were most likely caught up in the most intense period of Taliban iconoclasm in early 2001, during which giant Buddha statutes in the Bamiyan valley were blown up.
The sculptures tell a story of Buddhism’s heyday in what is now Afghanistan. Hundreds of monasteries were built and then abandoned after the arrival of the Arab armies in the 8th century and the establishment of Islam as the predominant religion.
“The return of any object which has been illegally trafficked is hugely important symbolically,” said Simpson. “But these pieces will form one of the largest groups of Buddhist art to be returned to the Kabul museum. When you think what Kabul has been through since the 1990s, culminating in the atrocity of Bamiyan, this is a huge event.”
The sculptures will be displayed for a short time at the British Museum before being given to officials at the Afghanistan embassy in London. They will then go on display in Kabul.
Seeking to highlight work the British Museum does that often goes under the radar, its director, Hartwig Fischer, said “war, conflict, climate change, globalisation, poverty and migration” all played a part in threats to cultural heritage.
“I am extremely proud of this deep and committed engagement, built collaboratively over many years … Sadly, this work is more essential now than ever and the museum will continue and increase its efforts to assist colleagues globally in the preservation and celebration of their cultural heritage.”
London has long been the centre of a thriving black market in illegally traded ancient artefacts.
The museum also revealed details of a group of 154 Mesopotamian texts written on small clay tablets that were seized on entry to the UK in February 2011. After investigations they will soon be returned to Iraq.
The work the museum does to facilitate the return of recently looted objects will inevitably raise questions of why it resists the repatriation of items in its collection that have been historically looted.
Some of the best known examples include the Benin bronzes, which were taken from what is now Nigeria by British forces in the late 19th century.
A new museum is planned in Benin City and Fischer said the British Museum had been involved in talks about collaboration and loans as part of a consortium called the Benin dialogue group. “What we have managed to do over the past year is to establish a much closer dialogue, exchange, collaboration, confidence, trust with our colleagues, especially in Benin City but also Lagos,” he said.
The museum’s 2018-19 annual review revealed on Monday that it received 6.02 million visitors in the year to April. That means that while Tate Modern was the most visited attraction in 2018, the museum was number one in the financial year.
Fischer addressed another contentious issue the museum faces: its continuing sponsorship by BP. Dropping the oil company would not be a meaningful contribution to the world’s environmental challenges, he argued.
“It’s looking to the ways we live and consume that will make a difference. Ending a partnership which over the years has created extraordinary learning opportunities, for people from all walks of life, is not a vital contribution to solving the environmental challenges and problems in the world,” Fischer said.