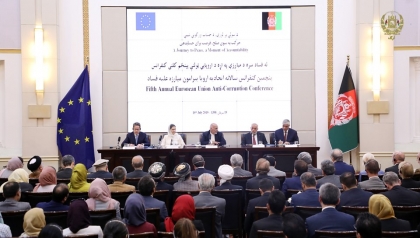 In the conference held at Chahar Chinar Palace and attended by the country’s First Lady, a number of members of cabinet and foreign ambassadors to Kabul, first EU ambassador Pierre Mayaudon spoke and said: “Today we would like to focus our attention on the role anti-corruption should play before, during and after the conclusion of a peace agreement.”
Afterwards, President Mohammad Ashraf Ghani spoke and by praising the EU for its assistance to Afghanistan and its emphasis on democratic values in particular the elections said the upcoming elections should be held without any doubts. “Today are taking preparation for peace and our country should not lose the opportunity for maintaining peace,” President Ghani said, adding that peace should be inclusive and national.

The country’s President asserted that their decision towards maintain peace were showing that we knew the price of war and it was the people of Afghanistan who were paying the price.
Pointing to recent terrorist attack in Ghazni, President Mohammad Ashraf Ghani said that attack on children was attack on humanity, praising the people of Afghanistan in particular ANDSF for their commitment to their government and constitution. “It is time for maintaining peace in the country as conditions have been provided and should be used extensively,” the country’s President said, stressing that going back is not acceptable to the nation and we will only go forward.

President Ghani said for the first time they have proved that ceasefire was not a dream and imagination, but it was a fact, adding that organized talks should be held between the government and Taliban and problems should be resolved wisely and determination is key in this regard.
Stressing that clear base has been put against corruption in the country, President Ghani said that counter corruption was not only the duty of a single person, but it was the duty of the government and all the people in the society.
Tags:
Presidential elections
Source : خبرگزاری Herat Afghan Voice Agency(AVA)
Friday 12 July 2019 00:02
Story Code: 188204 Copy text available
Ghani Stresses Timely Presidential Elections
Highly likely presidential elections to face delay
presidential elections and the work to create an initial peace framework in Afghanistan are top priorities for the United Nations
Presidential elections delayed in Afghanistan
New election commissioners in Afghanistan take oath
Featured news
US closes five military bases in Afghanistan
Iran 'drops' India from key rail project over funding delays
World Bank Forecasts Slowdown of Afghan Economic Growth
Atmar Meets New German Ambassador-Designate To Afghanistan
Four Civilians Killed In Pakistani Artillery Attack In Kunar
CAS confirms life ban on former Afghan football chief Keramuddin Karim
1
12 Taliban militants killed in Daikundi
2
Abdullah will soon finalize list of ministerial nominees: spokesman
3
UNAMA announces stance on announcement of final results of Afghan presidential elections
4
Afghan embassy in US offers explanation on $1.8 million wall project
5
A Comparative Study of US and Russia in Afghanistan: Local Repercussions
6
Regional, International Partners Unhappy With High Level Of Taliban Violence: Foreign Ministry
7
Taliban attacks kill 19 Afghan forces in Kunduz, Badakhshan provinces
8
Possible use of NATO aircraft to traffic Afghan drugs needs to be investigated — Lavrov
9
Sri Lanka Cabinet Approves Agreement to Transfer Sentenced Prisoners with Afghanistan
10
Modi govt’s pick to lead mission in Afghanistan as Taliban seeks to return to power