Turkey gets fresh S-400 shipment as US mulls sanctions

Turkey says a fresh shipment of Russian S-400 missile defense systems has arrived in the country, a day after it received the first batch of the systems. 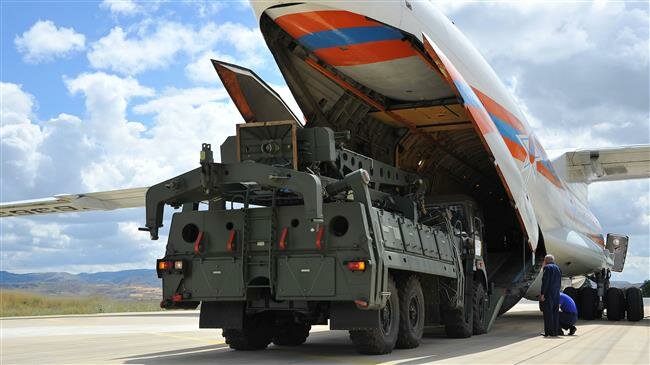 “Delivery of S-400 Long Range Air and Missile Defense Systems resumed today,” the Turkish Defense Ministry tweeted on Saturday.
It said that a fourth Russian cargo plane had landed at the Murted air base near the capital Ankara, a day after three huge Russian air force AN-124 planes offloaded equipment at the base.
The delivery is likely to anger the US, which has long warned that Turkey cannot have both the S-400 and American F-35 stealth fighter jets.
The US claims the S-400 systems are incompatible with NATO equipment and expose the F-35s to possible Russian subterfuge.
Washington is expected to level sanctions against Ankara under the 2017 Countering America’s Adversaries Through Sanctions Act, which mandates US sanctions against anyone making a significant deal with the Russian defense industry.
The US has already halted deliveries of F-35 to Turkey and suspended the training of Turkish pilots to fly the aircraft.
Turkey, however, says it has conducted technical studies on the compatibility of the S-400s and the F-35s and had found no issues of concern as alleged by the US.
It also stresses that the S-400 is a strategic defense requirement, above all to secure its southern borders.
On Friday, Acting US Defense Secretary Mark Esper held a telephone conversation with Turkish Defense Minister Hulusi Akar.
“Minister Akar told his US counterpart that Turkey remains under a serious air and missile threat and that purchase of S-400 defense systems was not an option but rather a necessity,” a Turkish Defense Ministry statement said.
Akar, it added, emphasized that Turkey’s purchase of the S-400 “does not in any way mean change of its strategic orientation.”
NATO said that although it was up to NATO member states to decide their acquisition of military equipment, the US-led military alliance was concerned about the equipment's incompatibility with its own systems.
"It is up to allies to decide what military equipment they buy. However, we are concerned about the potential consequences of Turkey's decision to acquire the S-400 system," a NATO official told AFP.
"Interoperability of our armed forces is fundamental to NATO for the conduct of our operations and missions," he added.