Novak Djokovic has beaten Roger Federer in the longest Wimbledon final ever to match Bjorn Borg by winning his fifth title. 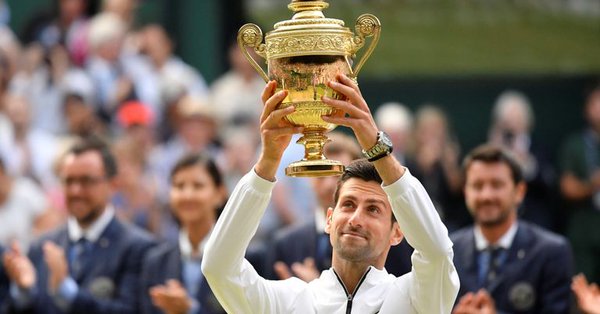 The top seed had saved two match points when Federer served for victory at 8-7 in the deciding set.

He went on to take it 7-6 (5) 1-6 7-6 (4) 4-6 13-12 (3) after an energy-sapping four hours and 57 minutes.
Federer had hoped to follow up his emotional semi-final victory over Rafael Nadal by completing the double over his other great rival for the first time at a grand slam. He fought back well after he was twice set down but this will be one of his most painful losses. The victory means the Serbian has now won four out of the last five major tournaments.

It takes his overall tally to 16 and making Federer's record of 20 seem ever more reachable.
This final has been dominated by its historical importance with 37-year-old Federer staring at perhaps his last chance to put further distance between himself and his younger rivals.
Nadal is now just two adrift and shows no sign of letting his iron grip on the French Open slip, while Djokovic has been open about the fact he is playing for history.

After his victory, Djokovic said: "Roger is one of the greatest players of all-time, who I respect a lot. He inspires me, for sure."
Federer said the final had been "crazy" and added: "I will try to forget this final but it was a great match!
"It was long and had everything. I had my chances, but so did he. I have to be happy with my performance. But Novak, congratulations, that was crazy.
"I hope I give some other people a chance to believe around the world. I gave it all I had and I can still stand. I hope the same can be said for all the other 37 year olds.
"My children won't be excited with the plate, they would be more excited with that golden thing. But it is all good, back to being a dad and a husband.
Tags:
Novak Djokovic fifth Wimbledon Roger Federer
Monday 15 July 2019 08:56
Story Code: 188348 Copy text available
Tennis: Federer wins Miami Open
Featured news
Afghanistan Again Among Top Corrupt Countries: Watchdog
Saleh to Taliban: ‘Why Pakistan Stand Behind You’
China quarantines Wuhan and Huanggang, and bans travel from and to cities as outbreak grows
Preliminary Survey & Route Map of Casa-1000 Completed
China Coronavirus; Fears Over The Spread of Deadly Virus
101 Taliban Insurgents Killed During Past Week: MoI
1
Afghanistan vs Kirghizstan 19 Year Olds Futsal Tournament, Friday
2
ICC U-19 World Cup: Pakistan beats Scotland by seven wickets
3
La Liga: Barcelona 1-0 Granada
4
Australian Open: Rafael Nadal 'doesn't care' about Roger Federer's Grand Slam record
5
Iran to discuss AFC ban on hosting home matches