Senior Afghan and U.S. security and defense officials met with the governor of Herat province on Tuesday to discuss security developments. 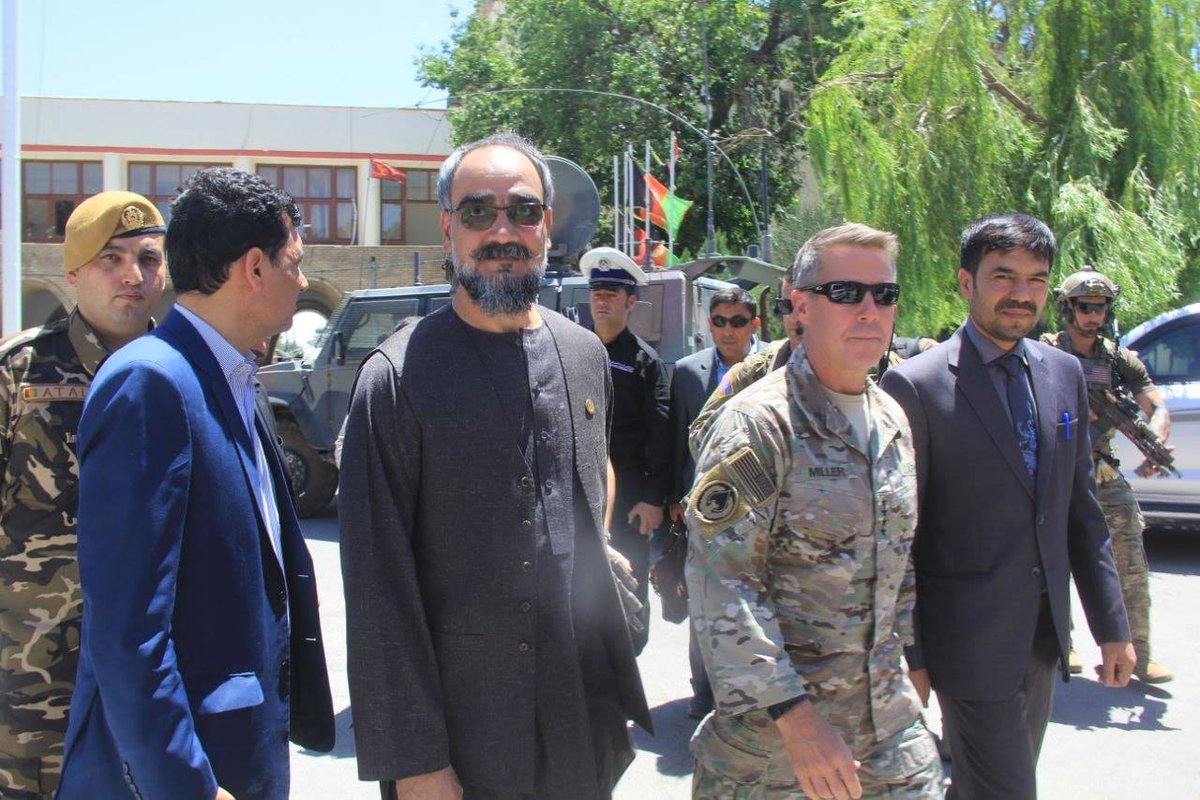 The Afghan and Coalition leadership including Major General Fazil Mohammad Jumbesh, 207th Corps Commander, Major General Aminullah Amarkhel, Provincial Chief of Police, Dr. Yasin Zia, Deputy Minister of Defense, Brigadier General Khoshal Sadat, Ministry of Interior Deputy Minister for Security, Abdul Matin Bek, Chairman of the Independent Directorate of Local Governance, and General Scott Miller, Resolute Support Commander met the governor in a security shura meeting.
In his speech during the meeting, Governor Rahimi stated, “The soldiers in 207th Corps are some of the best, what a great operation they have recently completed to defeat the Taliban.”
Rahimi further added that “The PCoP and his police are doing great work. The teamwork during this operation is what defeated the enemy. Thank you to all the units and the Corps Commander who coordinated this operation.”
Rahimi discussed several development projects that are upcoming and under way that will improve the quality of life for Afghan people.
“Direct association between the TB and drug dealers, trafficking, taxing, extorting, selling- they use drugs to fund their operations” said Rahimi.
Meanwhile MG Fazil Mohammad Jumbesh said “the strength of our forces is the coordination across the provincial government, the MOI and our forces.”
He also added that “We are consolidating our checkpoints into strong bases from where we can attack the enemy.”
Brigadier General Khoshal Sadat said “the good leadership, coordination and strong soldiers are why your operations are successful.”
He also added that “The enemy is scared, they have lost their morals, they use lies and propaganda to deceive the people but your success exposes their lies.”
Dr. Yasin Zia “I want to begin by praising the great Afghan National Army Territorial Forces here in Herat. They are strong and an important part of the security here.”
Meanwhile Rahimi continued, “it’s not about one single person, there is no individual, but the team is what makes us strong. The success is to the Herati people.”
General Miller congratulated the great success of the Herat security forces and reaffirmed support to the Afghan people.
Tags:
Senior Afghan, U.S. security and defense officials met with Herat governor
Source : Afghan Voice Agency(AVA)
Wednesday 17 July 2019 10:23
Story Code: 188487 Copy text available
Senior Afghan defense officials jailed over Kabul military hospital attack
Shah Mehmood Qureshi urges Pashtuns to get united to defeat anti-Pakistan mindsets
Syria on Mecca Summit: We Don’t Wait for Any Statement to Affirm Our Right in Golan
Annual exports from Iran’s Sistan, Baluchestan to Afghanistan increase 85%
US Ships still Responding to IRGC’s Questions in Strait of Hormuz: Top cmdr.
Featured news
Afghanistan Again Among Top Corrupt Countries: Watchdog
Saleh to Taliban: ‘Why Pakistan Stand Behind You’
China quarantines Wuhan and Huanggang, and bans travel from and to cities as outbreak grows
Preliminary Survey & Route Map of Casa-1000 Completed
China Coronavirus; Fears Over The Spread of Deadly Virus
101 Taliban Insurgents Killed During Past Week: MoI
1
UN Envoy Spotlights Impacts of Violence, Threats Against Reporters in Afghanistan
2
Afghan government demands complete ceasefire with Taliban
3
More than 20 Taliban militants killed – Herat
4
German-Afghan Army Adviser on Trial for Spying for Iran
5
US military says 11 US troops wounded in Iranian missile attack despite earlier denials
6
US troops block Russian forces’ way to oil fields in northeastern Syria
7
Pakistan PM Optimistic About US-Taliban Talks
8
US may sign Taliban deal with violence reduction, but it wouldn't help Afghans: VP Danish
9
Taliban Education Director Killed in Faryab
10
France deploys radar system, aircraft carrier in Saudi Arabia