Chief Executive Abdullah Abdullah began his election campaign on Sunday, saying the existence of two mainstream political parties in his team, including Jamiat-e-Islami and Junbish-e-Milli party (the National Islamic Movement of Afghanistan), will help him to achieve a landslide victory in the September poll. 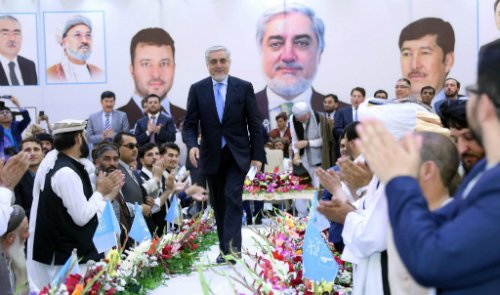 Abdullah said his campaign has also secured the support of Anwar-ul-Haq Ahadi, the head of New National Front of Afghanistan, and that Mr. Ahadi will be serving the post of chief executive once his team wins in the election.
He lashed out on his rival and incumbent President Mohammad Ashraf Ghani and pledged to bring change in the lives of ordinary Afghans.
“The entire people of Afghanistan know that we have 5,000 years of history, all know that what Ghazi [King] Amanullah has done and what others have done. Now, he [Ghani] is talking about the poets. They claim to have the legacy of Mawlana and Bedil (two prominent Persian poets). The least respect to these personalities is that their poems should be recited correctly,” Abdullah said.
“There are people who are accused of corruption but they are working in two posts,” said Enayatullah Babur Farahmand, Abdullah first running mate, referring to recent appointments by Mr. Ghani.
Mr. Abdullah entered the race for Afghanistan’s presidential election with Junbish-e-Milli member Enayatullah Babur Farahmand as his running mate for first Vice President and former MP Asadullah Saadati as his running mate for the second VP.
Abdullah was among leading candidates in 2009 and 2014 presidential elections. In 2009, he withdraw from the race to prevent a second round of elections and former President Hamid Karzai was announced as the winner. In 2014 election, he became part of a unity government with President Ghani.
Abdullah’s running mate as first vice president, Mr. Farahmand, was head of the incumbent First Vice President and head of Junbish-e-Milli party Abdul Rashid Dostum’s office after 2010. He has also represented Jawzjan as a lawmaker in Afghanistan's parliament.
Abdullah concluded that the National Unity Government had seatbacks and achievements in the past five years, adding that there were also some issues during this period which harmed Afghanistan’s governance, the Afghan politics, national unity and the pride and dignity of the Afghan people.
Tags:
Abdullah Predicts Victory As Election Campaign Begins
Source : Afghan Voice Agency(AVA)
Sunday 28 July 2019 18:50
Story Code: 189109 Copy text available
Featured news
Coronavirus: 30 of 165 Cases Test Positive in Afghanistan
Atmar, Wilson discuss peace process, urgent need for ceasefire
Intra-Afghan Negotiations: Progress Made over Talks Agenda, Nadery Says
Abdullah: Expected For Taliban To Also Call For Ceasefire In Afghanistan
Former UNAMA chief warns peace talks ‘will not be easy’
MFA: UNSC Support For Peace Talks With Taliban ‘Highly Encouraging’ For Afghanistan
1
'No peace' in Middle East without end to Israeli occupation: Abbas
2
speech by the spokesman of the Ministry of Interior in connection with the recent developments in country