Donald Trump on Friday confirmed his administration is gearing up to bring U.S. troops home from Afghanistan in an effort to make a peace deal with the Taliban. 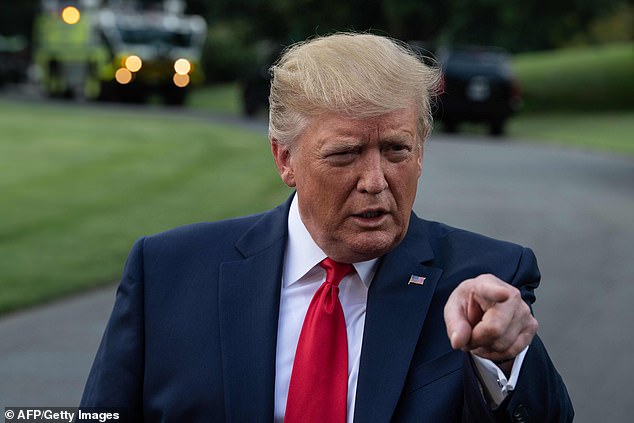 'We've been moving it down,' he told reporters on the South Lawn of the White House of the situation there.
The president bragged he could end the war in a few days if he wanted to but he wouldn't use nuclear weapons on innocent people in order to do so.
'With respect to Afghanistan, we made a lot of progress. We're talking. But we've also made a lot of progress. We're reducing it. We've been there for 19 years,' he added.
'I could win that war in a week if I wanted to. I'm not looking to kill 10 million people. Okay? Many of them would be innocent people. I'm not looking to do that. I'm not talking nuclear, by the way. I'm talking totally conventional. But I'm not looking to kill millions of people in Afghanistan,' he added.
In return for bringing home American troops, the White House is seeking a number of concessions from the Islamic fundamentalists including a cease-fire and the renunciation of al-Qaeda, U.S. officials revealed.
The deal, which would also necessitate the Taliban negotiation a more rigorous peace agreement with the Afghan government, would see the number of American troops in the region cut from about 14,000 to somewhere between eight and nine thousand – the same amount as when Trump first took office.
White House officials have undertaken eight rounds of negotiations with the Taliban over a series of months, led by Afghan-born diplomatic representative Zalmay Khalilzad.
According to Khalilzad's projections, an initial peace agreement could be struck with the Taliban in the next round of talks, scheduled to take place in Qatar later this week.
'In Doha, if the Taliban do their part, we will do ours, and conclude the agreement we have been working on,' Khalilzad tweeted Wednesday, later adding: 'Wrapping up my most productive visit to #Afghanistan since I took this job as Special Rep.'
Khalilzad is hoping to finalize all arrangements before the Afghan presidential elections in September, but he's warned that significant challenges remain ahead before any troops can be withdrawn.
'I would say that they are 80 or 90 percent of the way there,' one anonymous official told the Washington Post. 'But there is still a long way to go on that last 10 or 20 percent.'
Taliban spokesman Zabiullah Mujahid declined to comment at the likelihood of the deal being finalized, but said he was 'hopeful' that peace can be found.
'We are hopeful,' he said. 'Things look promising that there will be a breakthrough. We hope there won’t be any obstacle, but it also depends on the seriousness of the Americans.'
However, doubts continue to persist about the trustworthiness of the Taliban leaders and how to ensure they actually follow through with their side of the agreement.
U.S. officials have also voiced concerns the Taliban may not part-ways with al-Qaeda or stand up to the Islamic State, potentially allowing the country to be used as a launch-pad for international terror plots.
Some believe the Taliban view the talks more as a withdrawal negotiation rather than a peace agreement.
So far, the Taliban is refusing to communicate in any capacity with the Afghan government - which they call a puppet regime - until they've struck a deal with the US regarding a reduced military presence.
The Defense Department has not ordered any withdrawals - a fact stressed by a number of Pentagon officials.
'Our strategy in Afghanistan is conditions-based,' Cmdr. Sean Robertson explained to the Post. 'Our troops will remain in Afghanistan at appropriate levels so long as their presence is required to safeguard US interests.'
During an interview with Tucker Carlson this week Trump expressed frustration at the cost of rebuilding Afghanistan since NATO's 2001 invasion, which was prompted by the 9/11 attacks.
'With Afghanistan, it's 19 years and we should not have been there 19 years and if we were, you know, it would be nice to fight to win,' he told the FOX host. 'But it's just 19 years. They're building hotels - we are. I mean, we had a Holiday Inn that cost numbers that would be 10 times what it should have cost.'
While the Taliban refuse to communicate with the country's native government, their insurgents - who ruled Afghanistan between 1996-2001 - continue to carry out attacks on Afghan forces.
This has led to Afghan National Security and Defense Forces losing troops at an incredible rate - the fastest for many years.
Furthermore, last year proved to be the deadliest on record for civilians in the country during the entirety of the near two-decade conflict. Nearly 4,000 were killed and a further 7,000 were wounded, the United Nations said.
In total, nearly 2,400 American soldiers have been killed on the battlefield in Afghanistan since 2001, and another 21,000 have been wounded.
On Monday, two U.S. soldiers - 24-year-old Michael Nance and Brandon Kreischer, 20 - were killed in an 'insider' attack by an Afghan soldier in the province of Uruzgan, becoming the latest casualties of the US' longest war.
It's predicted the 18-year conflict has cost the government a staggering $900 billion, including the cost of military operations as well as the constructions of roads, bridges and power plants.