Taliban Signal to ‘Conclude an Agreement’ With US: Khalilzad

The U.S. Special Representative for Afghanistan Reconciliation, Zalmay Khalilzad said on Saturday that the United States is ready for “a good agreement” with the Taliban. 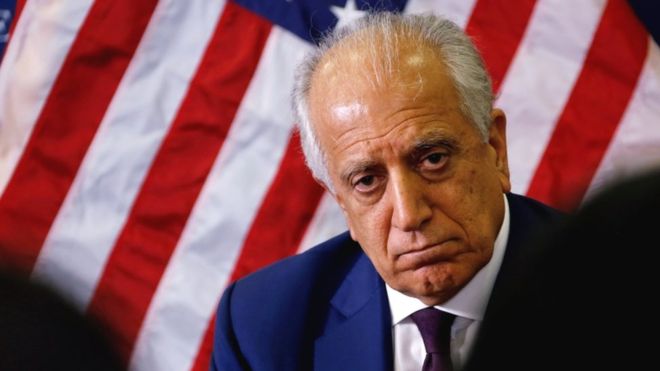 The U.S. Envoy arrived in Doha, the capital of Qatar, to resume talks with the Taliban representatives.
A spokesman for the Taliban, Zabihullah Mujahid said in a tweet that U.S. and Taliban delegates would resume their peace negotiation at around 10 am on Saturday.
Meanwhile, Khalilzad said that the U.S. is “pursuing a peace agreement not a withdrawal agreement; a peace agreement that enables withdrawal.”
“Our presence in Afghanistan is conditions-based, and any withdrawal will be conditions-based,” he said in a tweet.
“The Taliban are signaling they would like to conclude an agreement. We are ready for a good agreement,” the U.S. Envoy added.
It comes as the U.S. is preparing to withdraw thousands of troops from Afghanistan as part of an initial peace deal to end the long-term conflict in the war-weary country.
According to the Washington Post, the Trump administration is preparing to reduce its troops in Afghanistan from nearly 14000 to between 8000 and 9000.
The agreement would require the Taliban to broker a peace deal directly with the Afghan government, and give assurances the country won’t be used as a launching pad for international terror attacks, the report said.
Tags:
Taliban Signal to ‘Conclude an Agreement’ With US: Khalilzad
Source : Afghan Voice Agency(AVA)
Saturday 3 August 2019 10:20
Story Code: 189395 Copy text available
U.S. Seeks Peace Agreement, Not Withdrawal Agreement: Khalilzad
Afghan peace council to invite Taliban to Kabul
Afghanistan won’t attend Jeddah conference unless granted ‘strong guarantee’
Taliban rejects offer of peace talks with Ghanis’ administration
Afghan forces eliminating Taliban field commanders seen obstacle to peace
Featured news
President Ghani: We are fully committed to putting an end to the war in Afghanistan
President Assad says Syrians will liberate whole country from grips of terrorists
New China Virus Cases Drop for Third Day as Toll Passes 1,600
Zionist Warplanes Attack Resistance Sites in Gaza
Sayyed Nasrallah: Trump’s Two Recent Crimes Usher Direct Confrontation with Resistance Forces
UN Chief To Address Afghan Refugee Conference During Pakistan Visit
1
40 days ago, US killed a man who first rushed to Iraq’s aid against Daesh
2
General Suleimani’s Will Urges All Muslims to Preserve Unity in Face of US Intervention
3
Iran to Israel: Don’t you dare take any foolish action against our interests in Syria
4
Syrian parliament recognizes Armenian genocide amid Ankara-Damascus tensions
5
Afghan sports coach says she will flee after dog shot dead
6
Has Afghanistan’s security taken precedence over Iraq for the US?
7
Afghanistan Launches National Trade Policy
8
Trump conditionally approves peace deal with Taliban
9
US service member killed in non-combat incident in Afghanistan
10
Afghanistan Reconstruction Programs Suffered More Than 5,000 Casualties in 16 Years